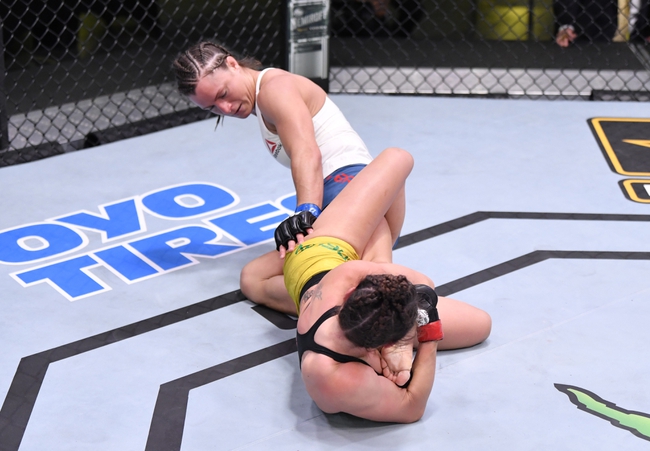 Mackenzie Dern enters this fight with a 8-1 record and has won 63 percent of her fights by submission. Dern has won five of her last six fights and is coming off a May win over Hannah Cifers. Dern is averaging 3.14 significant strikes per minute with an accuracy percentage of 32 percent. Dern is averaging 0.43 takedowns with an accuracy percentage of seven percent. Dern is coming off a first round submission victory at UFC Vegas that earned performance of the night honors. It was Dern’s first win MMA win via kneebar, and four of her five submission victories for her career have come through different methods. Dern is a black belt in BJJ and has possibly the most decorated background in submission wrestling, and she’s won countless medals in various events. Dern is deadly when she can dictate the pace of the fight and get things on the canvas or simply just get her hands on her opponent. The daughter of Wellington Dias, Dern was born into a grappling and judo family, and her scrambling ability is as good as it gets. There’s no secrets on what Dern wants to do in that octagon and you have to like her chances if she gets the style of fight she wants. This will be Dern’s third career fight in Las Vegas.

Randa Markos enters this fight with a 10-8 record and has won 60 percent of her fights by decision. Markos has split her last four fights and is coming off a March loss to Amanda Ribas. Markos is averaging 2.96 significant strikes per minute with an accuracy percentage of 41 percent. Markos is averaging 1.35 takedowns with an accuracy percentage of 28 percent. Markos is coming off a decision loss at UFC Fight Night 170 where she ate 173 total strikes and was taken down once. Markos has pretty much been hit or miss her entire MMA career, but she’s never lost back-to-back fights. Markos is a purple belt in BJJ with a background in wrestling, and she seems to be at her best on the ground. Markos has good takedown ability despite what her UFC numbers say and she does a good job of gaining top position once on the ground. Not known for being a striker, but Markos can force the issue at times standing up and she has impressive ground and pound if given the chance. None of Markos’ 19 pro fights have ended in knockout. This will be Markos’ fourth career fight in Las Vegas.

Markos has a chance in this fight if she can keep it on the feet, as she has quicker hands and puts together her combinations nicely. The issue here is Dern usually gets the fight where she wants it and she has a clear edge on the ground with her grappling background and submission history. It takes one mistake from Markos for her to get dragged into the deep end of the swimming pool and for this fight to slip out of her hands.

Dern should win this fight and the price is reasonable to back her in an outright victory.