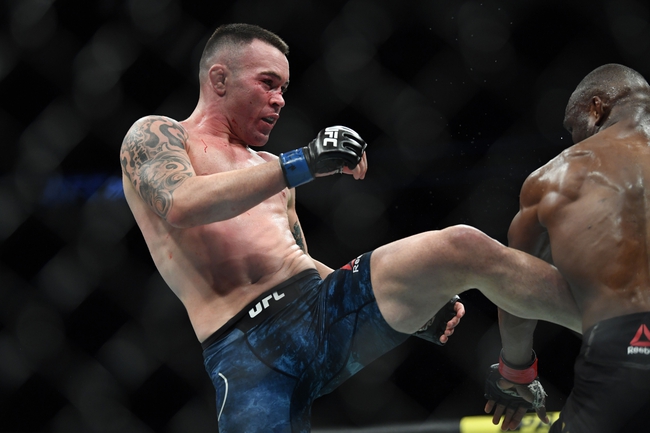 Colby Covington enters this fight with a 15-2 record and has won 53 percent of his fights by decision. Covington has won eight of his last 10 fights and is coming off a December loss to Kamaru Usman. Covington is averaging 4.17 significant strikes per minute with an accuracy percentage of 37 percent. Covington is averaging 4.91 takedowns with an accuracy percentage of 51 percent. Covington watched his seven-fight winning streak come to an end at UFC 245, a bout that earned fight of the night honors. The fight produced well over 300 total strikes and not a single takedown attempt through five rounds. Covington now hopes to avoid back-to-back losses for the first time in his career. Covington comes from a wrestling background, and he has an impressive gas tank to go along with high level grappling and five submission victories on his resume. However, Covington is also a tricky southpaw with a relentless work rate and some serious pop in his hands. While each of his last five victories have ended in decisions, Covington just showed in his last bout that he can trade standing up and throw the wrestling out the window. At 32 years old, Covington is a balanced fighter who is easily one of the best in this division. This will be Covington’s fifth career fight in Las Vegas.

Tyron Woodley enters this fight with a 19-5-1 record and has won 37 percent of his fights by knockout. Woodley has won five of his last eight fights and is coming off a May loss to Gilbert Burns. Woodley is averaging 2.38 significant strikes per minute with an accuracy percentage of 49 percent. Woodley is averaging 1.11 takedowns with an accuracy percentage of 39 percent. Woodley is coming off a one-sided decision loss at UFC Vegas where he landed just 65 total strikes and failed on his two takedown attempts. Woodley simple has not looked good in his last two fights and he hopes to avoid three straight losses for the first time in his career. When in good form, Woodley has a nasty standup game with extreme power in his hands and violent leg kicks that have dropped many opponents. A black belt in BJJ and a D1 wrestling background, Woodley is quite effective when he shoots and has an effective ground and pound if a fight goes to the canvas. While Woodley is a fun watch, it’s his IQ that gives him an edge over most fighters in this division. Woodley rarely puts himself in danger, is smart defensively and has some of the best reaction speed you’ll find in the octagon. This will be Woodley’s eighth career fight in Las Vegas.

There’s no way I can get behind Woodley with any confidence given what we’ve seen in his last two fights. Woodley has looked lost, isn’t letting his hands go and he hasn’t had much success with his takedowns. There’s bad blood between these two fighters, so maybe Woodley is more aggressive this time, but I have to see it to believe it. Covington gave Usman a run for his money, and he has the wrestling to hang with Woodley while having a clear edge standing up based on what we’ve seen recently.

I have no choice but to back Covington here, and I’ll take him by finish to soften the price.