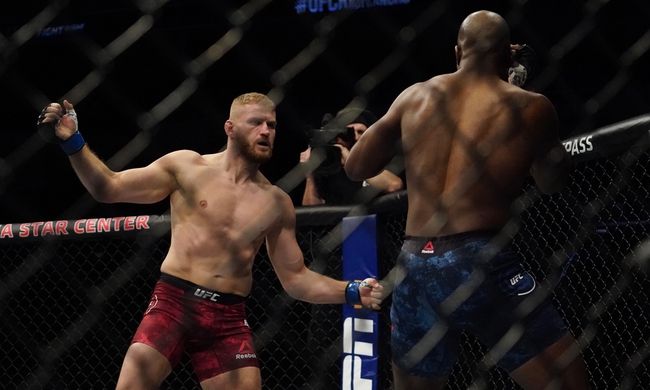 Dominick Reyes and Jan Blachowicz fight Saturday night during UFC 253 at the Flash Forum on PPV.

Dominick Reyes enters this fight with a 12-1 record and has won 58 percent of his fights by knockout. Reyes has won five of his last six fights and is coming off a February loss to Jon Jones. Reyes is averaging 4.88 significant strikes per minute with an accuracy percentage of 49 percent. Reyes is averaging 0.24 takedowns with an accuracy percentage of 16 percent. Reyes is coming off a competitive fight at UFC 247 where he landed more total strikes (119) but was less accurate with his significant strikes and was taken down twice. Reyes certainly gave Jones one of the better fights in recent memory and has a lot of people asking for a rematch in the near future. Reyes is a big guy at 6’4” who has a blue belt in BJJ, and he uses his legs well to the point he’s produced clean knockout victories in the past. Reyes has excellent takedown defense and has some underrated pop in his hands as well. An athletic fighter who moves well in the octagon, Reyes has finished nine of his 12 victories and is one of the better strikers in this division. This will be Reyes’ first career fight in Abu Dhabi.

Jan Blachowicz enters this fight with a 26-8 record and has won 38 percent of his fights by decision. Blachowicz has won seven of his last eight fights and is coming off a February win over Corey Anderson. Blachowicz is averaging 3.45 significant strikes per minute with an accuracy percentage of 48 percent. Blachowicz is averaging 1.16 takedowns with an accuracy percentage of 52 percent. Blachowicz is coming off a first round knockout at UFC Fight Night 167 that earned performance of the night honors. Blachowicz has now won three straight fights overall and five of his last seven victories have earned performance bonuses. A black belt in BJJ, Blachowicz is a scrappy Polish fighter who is willing to push the pace and trade on the feet if needed. Blachowicz can take a punch and keep coming forward, and he has decent defense on the feet despite his aggressive style. Blachowicz is also a solid takedown artist who has a strong ground and pound and nine career submission victories. Blachowicz also has above average cardio that’s allowed him to be effective through all rounds and has helped him win 10 of his 15 career decisions. This will be Blachowicz’s first career fight in Abu Dhabi.

Reyes just went toe to toe with arguably the best fighter in the sport and I get the feeling that’s playing into this line a bit. Reyes is extremely talented, the better athlete in this fight and probably has slightly more pop in his striking. There’s reasons to like Reyes in this fight and he probably should be favored. However, this line is showing zero respect to Blachowicz, a tough dude who probably has the cleaner striking and can control things on the ground if the fight goes there. Blachowicz can land some nasty counters and has a clear edge in the grappling as well. These odds are confusing if we’re being completely honest.

Not sure how you turn down Blachowicz and the big plus money.