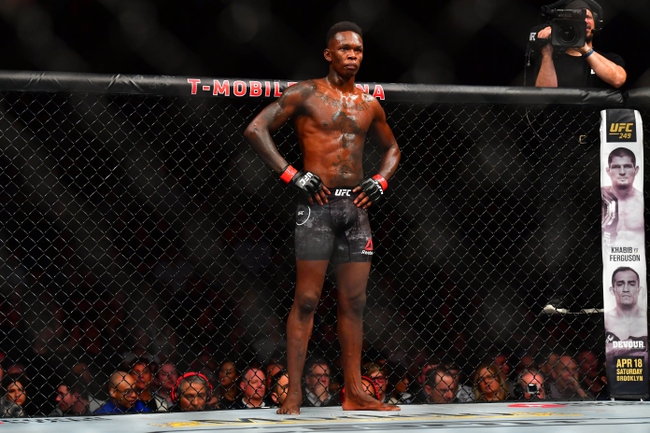 Israel Adesanya and Paulo Costa fight Saturday night during UFC 253 at the Flash Forum on PPV.

Israel Adesanya enters this fight with a 19-0 record and has won 74 percent of his fights by knockout. This will be Adesanya’s ninth fight since 2018, and he’s coming off a March win over Yoel Romero. Adesanya is averaging 3.96 significant strikes per minute with an accuracy percentage of 48 percent. Adesanya is averaging zero takedowns with an accuracy percentage of zero percent. Adesanya is coming off a boring decision victory at UFC 248 where he landed 48 total strikes and defended three takedowns. It felt like neither fighter wanted to force the issue offensively and it was a lot of dancing around the octagon, and Adesanya did just enough to get the job done and not fall into a trap with Romero. Adesanya is simply an athletic freak who comes from a kickboxing and boxing background and is as crafty and creative as they come. Adesanya is long, rangy with an 80-inch reach, mixes in his leg kicks well and has an unorthodox stance that throws off his opponent. It’s hard to predict what Adesanya is going to do next, and when you throw in his striking power with the unpredictability, you get a dangerous fighter who has shown little weakness up to this point. However, Adesanya will have to prove at some point that he can survive the canvas and tap into that wrestling bag and his last bout didn’t give him that chance. This will be Adesanya’s first career fight in Abu Dhabi.

Paulo Costa enters this fight with a 13-0 record and has won 85 percent of his fights by knockout. This will be Costa’s third fight since 2018 and he’s coming off an August (2019) win over Yoel Romero. Costa is averaging 8.43 significant strikes per minute with an accuracy percentage of 57 percent. Costa is averaging zero takedowns with an accuracy percentage of zero percent. Costa is coming off a decision win at UFC 241 where he landed 118 total strikes and 55 percent of his significant strikes, a performance that earned him fight of the night honors. Costa, who has won 11 of his 13 fights by knockout, is coming off his first career decision. Costa is a massive fighter at middleweight who throws every strike with the intention to hurt his opponent, and he has good variety to his strikes. Costa has legit knockout power in both hands, but he also has many different kicks that he loves to unleash and will take full advantage of any defensive weakness. Costa, who also has a black belt in BJJ, is always pressing the issue offensively and usually looks to back his opponent against the cage where he can capitalize off the lack of movement and go to work with his power shots. Costa has above average takedown defense as well and just proved any cardio questions after going the distance for the first time in his career. This will be Costa’s first career fight in Abu Dhabi.

Costa and the plus money is always worth a look, as he has tremendous striking power and is sure to push the offensively. Plus money and knockout artists always hold value, even if they’re going up against a better fighter. The issue here is Adesanya is the more polished fighter of the two, has a considerable reach advantage and has gone up against heavy handed strikers in the past. After recently passing the tests of Yoel Romero, Robert Whittaker and Kelvin Gastelum, any questions about Adesanya and his ability need to be thrown out the window.

Adesanya and his technique get the job done here, and I’ll take him by knockout to turn juice into plus money.

The pick in this article is the opinion of the writer, not a Sports Chat Place site consensus.
Previous Pick
UFC 253: Jan Blachowicz vs. Dominick Reyes - Pick, Odds, and Prediction
Next Pick
UFC on ESPN 16: Jessin Ayari vs. Luigi Vendramini - UFC Picks, Predictions