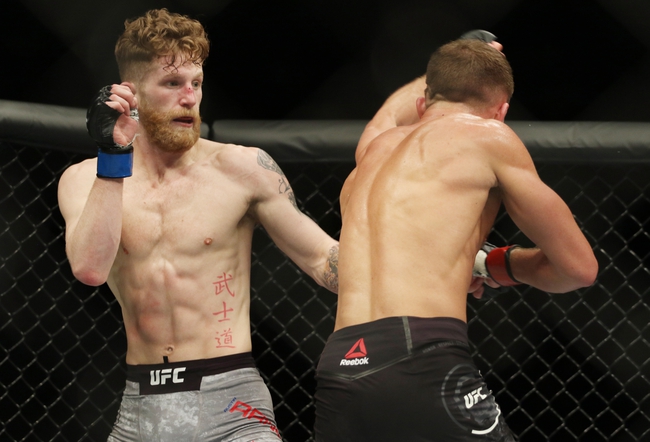 Shane Young and Ľudovít Klein fight Saturday night during UFC 253 at the Flash Forum on PPV.

Shane Young enters this fight with a 13-4 record and has won 46 percent of his fights by knockout. Young has won seven of his last eight fights, and he’s coming off a February (2019) win over Austin Arnett. Young is averaging 6.10 significant strikes per minute with an accuracy percentage of 40 percent. Young is averaging 0.76 takedowns with an accuracy percentage of 25 percent. Young is coming off a decision win at UFC 234 where he landed 121 total strikes and 38 percent of his significant strikes. Young is now 2-1 under the UFC banner and has lost just one fight in the last six years overall. Young trains out of City Kickboxing and does his best work on the feet where he has a come forward style and throws combinations while mixing in leg kicks well. Young isn’t the quickest or most powerful striker in the world, but his technique and timing gives him an edge and he has six knockout wins under his belt. Young also defends takedowns well and his cardio as good as it gets in this division. Young has never been finished in his career despite four career losses.

Ľudovít Klein enters this fight with a 16-2 record and has won 50 percent of his fights by submission. Klein has won each of his last seven fights, and he’s coming off a February win over Lukasz Sajewski. Klein will make his UFC debut after the original opponent in Nate Landwehr tested positive for COVID. Klein is a 25-year-old out of Slovakia, and he last fought in Oktagon MMA, and his last three victories have been decided by knockout. Klein comes from boxing background and does some of his best work on the feet where he works well behind his jab and has a high work rate. Klein also has a dangerous head kick and two of his knockouts have come with a high kick. Klein also has above average wrestling and has eight career submission victories. Only one of Klein’s 16 career victories have come via decision.

Klein probably has the edge in this fight because of his wrestling and his finish ability overall. However, I’m not trying to back Klein in the favorite role because of his lack of experience on the big stage and the fact he’s taking this fight on such short notice. Young is a polished striker and has top notch cardio that’s going to keep him in this fight. Young has also never been finished, so we’re getting some value in the underdog role here.

Toss up fight, but I give the edge to Young.