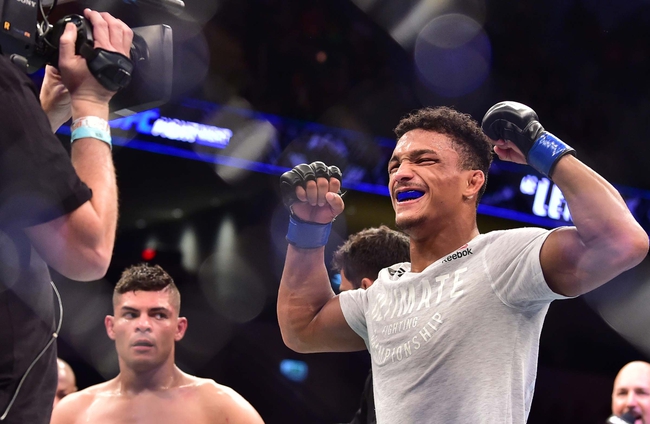 Brad Riddell enters this fight with a 8-1 record and has won 63 percent of his fights by knockout. Riddell has won each of his last five fights and he’s coming off an February win over Magomed Mustafaev. Riddell is averaging 4.30 significant strikes per minute with an accuracy percentage of 57 percent. Riddell is averaging one takedown with an accuracy percentage of 100 percent. Riddell improved to 2-0 under the UFC banner with a split decision victory at UFC Fight Night 168 where he landed 60 total strikes and had one takedown. Riddell has seen each of his last three fights end in decision. Riddell comes from a kickboxing background and obviously does his best work on the feet where he mixes in leg kicks well and throws heavy strikes to the body. While he’s not known for his ground game, Riddell ha shown he can execute takedowns well and do just enough to get back on his feet when needed.

Alex da Silva enters this fight with a 21-2 record and has won 62 percent of his fights by knockout. da Silva has won six of his last eight fights and he’s coming off an August (2019) win over Rodrigo Vargas. da Silva is averaging 1.08 significant strikes per minute with an accuracy percentage of 43 percent. da Silva is averaging 2.59 takedowns with an accuracy percentage of 57 percent. da Silva got his first UFC victory at UFC Fight Night 156 where he landed 88 total strikes and produced three takedowns. da Silva is now 1-1 under the UFC banner and he’s coming off his first ever victory that wasn’t a finish. da Silva has 13 knockouts and seven submissions on his resume, and he’s a violent striker with legit one punch knockout power and has a few knockouts with his elbows and knees as well. da Silva has seen four of his seven submission victories end via the rear-naked choke. Cardio has been a concern for da Silva in the past, but there’s no denying his striking ability and his constant ability to finish fights.

Riddell is probably the more balanced fighter of the two and his kickboxing background will help him keep his distance on the feet and avoid big strikes from da Silva. However, we’re getting the more experienced fighter and a finish machine in da Silva. This line is showing a little much too much respect in favor of Riddell, and it’s hard not to side with the Brazilian and the massive plus money.

Give me the underdog.