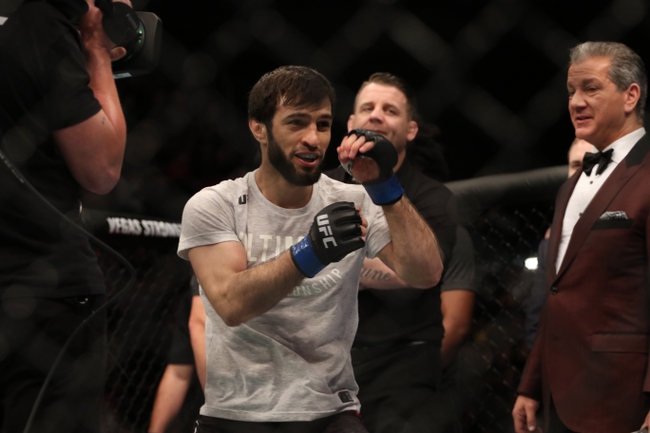 Hakeem Dawodu and Zubaira Tukhugov fight Saturday night during UFC 253 at the Flash Forum on PPV.

Hakeem Dawodu enters this fight with a 11-1-1 record and has won 64 percent of his fights by knockout. Dawodu has won each of his last four fights, and he’s coming off a November win over Julio Arce. Dawodu is averaging 5.28 significant strikes per minute with an accuracy percentage of 46 percent. Dawodu is averaging zero takedowns with an accuracy percentage of zero percent. Dawodu is coming off a split decision win at UFC 244 where he landed 83 total strikes and defended two of three takedowns. Dawodu is now 4-1 under the UFC banner and has won all four of his career decisions. Dawodu comes from a Muay Tahi and kickboxing background, and he was a perfect 9-0 in kickboxing and 42-5 in Muay Tahi. Dawodu is an athletic fighter who throws everything hard and is most comfortable on the stand up where he works the body with his punches and delivers accurate kicks. And while Dawodu was known as a knockout artist, three of his last four victories have come via decision, so he’s shown good cardio and the ability to defend takedowns and grind out victories. This will be Dawodu’s first career fight in Abu Dhabi.

Zubaira Tukhugov enters this fight with a 19-4-1 record and has won 58 percent of his fights by decision. Tukhugov has won six of his last eight fights, and he’s coming off a February win over Kevin Aguilar. Tukhugov is averaging 2.58 significant strikes per minute with an accuracy percentage of 38 percent. Tukhugov is averaging 2.88 takedowns with an accuracy percentage of 56 percent. Tukhugov is coming off a first round knockout at UFC Fight Night 168 where he landed 28 total strikes and 77 precent of his significant strikes. Tukhugov is now 3-1-1 under the UFC banner and looks for back-to-back wins for the first time since 2014-15. Tukhugov is a freestyle fighter with a Muay Thai style, and he’s usually looking for the takedown where he can control the fight and wear on his opponent. Tukhugov has won 11 of his 13 career decisions. Tukhugov is also a power striker on the feet, and he throws these winging power shots that can be inaccurate at times, but he does have seven career knockouts. A tough Russian fighter, Tukhugov has a little more balance to his attack than some of the fighters he trains with. This will be Tukhugov’s second career fight in Abu Dhabi.

This should be a fun fight between two power strikers who have athleticism and enough cardio to keep us entertained throughout the bout. Dawodu is a physical striker with high level Muay Thai, while Tukhugov is a physical striker with high level wrestling. You could make a case for either side here, but I do give the slight edge to Tukhugov because of his wrestling. Tukhugov is good enough to hang in there on the feet, but he can suck the life out of the fight if he gets it on the ground and tire Dawodu out to a decision victory.

Close, competitive fight, but Tukhugov should be the slight favorite.