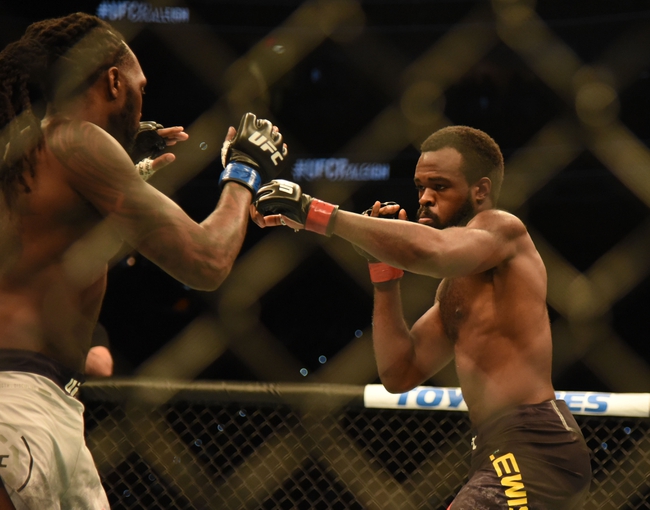 Dequan Townsend and Dusko Todorovic fight Saturday night during UFC on ESPN 16 at the Flash Forum.

Dequan Townsend enters this fight with a 21-11 record and has won 57 percent of his fights by knockout. Townsend has lost each of his last three fights and is coming off a February loss to Devin Clark. Townsend is averaging 1.15 significant strikes per minute with an accuracy percentage of 35 percent. Townsend is averaging zero takedowns with an accuracy percentage of zero percent. Townsend is coming off a decision loss at UFC Fight Night 167 where he landed just 37 total strikes and was taken down three times. It was a really rough performance from Townsend, and he’s now 0-3 under the UFC banner. Townsend is a powerful striker who does his best work on his feet, as he has 12 career knockouts and uses his range to mix in some powerful kicks. Townsend also has five career submissions with two of those wins coming via the guillotine choke. The downside is that Townsend is rough defensively, as he takes a lot of unnecessary   strikes standing up and has little to no takedown defense. Townsend is a tough fighter who has only been finished twice despite 11 career losses, but there’s a lot of holes in his game that’s led to some of these recent struggles.

Dusko Todorovic enters this fight with a 9-0 record and has won 56 percent of his fights by knockout. This will be Todorovic’s second fight since 2019, and he is coming off an August (2019) win over Teddy Ash. Todorovic is averaging 6.80 significant strikes per minute with an accuracy percentage of 71 percent. Todorovic is averaging zero takedowns with an accuracy percentage of zero percent. Todorovic will make his UFC debut here after getting a decision victory in Dana White's Contender Series season three more than a year ago. Todorovic was supposed to make his debut at UFC on ESPN 13 but was forced to pull out due to a medical issue. Todorovic is a 26-year-old out of Serbia with polished standup striking and has a background in kickboxing and Judo. Todorovic puts his combinations together nicely, has a strong right hand and his defense is extremely sharp. Todorovic slips punches well and you almost never see him eat a clean shot from opponents. Todorovic also has great takedown ability and a strong ground and pound. A real sharp fighter, Todorovic has the ability to fly up the division.

Townsend has the pop to end this fight and it gives him a punchers chance in the underdog role, but his defensive flaws are extremely concerning and it makes for a bad matchup here. Todorovic is a terrific stand up striker with solid defensive ability, and he has the ability to take the fight to the ground if wanted. Todorovic should honestly have zero issues in this fight.

Give me Todorovic inside distance to shave down the expensive ML price.