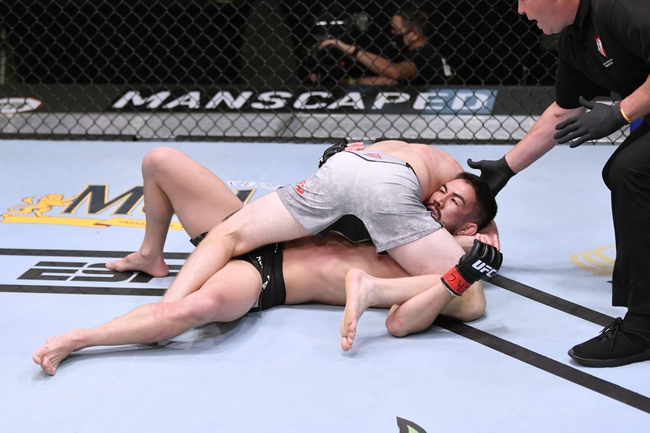 Casey Kenney and Heili Alateng fight Saturday night during UFC on ESPN 16 at the Flash Forum.

Casey Kenney enters this fight with a 14-2 record and has won 50 percent of his fights by decision. Kenney has won seven of his last eight fights and is coming off a May win over Louis Smolka. Kenney is averaging 3.66 significant strikes per minute with an accuracy percentage of 42 percent. Kenney is averaging 1.35 takedowns with an accuracy percentage of 50 percent. Kenney is coming off a first round submission victory at UFC on ESPN 9 where he landed 32 total strikes and 61 precent of his significant strikes. Kenney is now 3-1 under the UFC banner and is already fighting for the third time this year. Kenney is a black belt in judo and a purple belt in BJJ, and he now has five career submission victories. Kenney is a counter-striker on the feet where he uses everything in his tool box and has a couple of violent knockouts, including a knee that dropped Vince Cachero in March of last year. Kenney’s judo background makes him an excellent takedown artist and he transitions well once on the canvas. At just 29 years old and with this start in the UFC, Kenney is certainly a name to watch in this division. This will be Kenney’s first career fight outside of the United States.

Heili Alateng enters this fight with a 14-7 record and has won 50 percent of his fights by decision. Alateng has won his last four fights and is coming off a December win over Ryan Benoit. Alateng is averaging 2.77 significant strikes per minute with an accuracy percentage of 37 percent. Alateng is averaging 3.50 takedowns with an accuracy percentage of 35 percent. Alateng is coming off a split decision win at UFC Fight Night 165 where he landed 72 total strikes, 35 percent of his significant strikes and produced four takedowns. Alateng is now 2-0 under the UFC banner and hasn’t lost a fight overall in over three years. Alateng has improved a lot over the years on the feet, but he’s still at his best on the ground where he puts his wrestling to use and can control the fight with position and ground and pound. Alateng was very aggressive with his takedowns in his last bout and he doesn’t get discouraged when he fails with a takedown attempt. Alateng sticks to the game plan and eventually gets the fight where he wants it.

Alateng has the wrestling to compete in this fight, but that’s about the only edge he has heading into the octagon. Kenney is the better striker with the ability to produce a knockout, and he has good enough BJJ to hang with Alateng in his comfort zone if needed. Kenney is simply the more balanced fighter in this spot, has more ways to win, and he’s somebody who can truly move up the rankings in this division. Keep an eye on Kenney moving forward.

I like Kenney to win this fight, and I’ll take him by decision to shave down the expensive ML price.