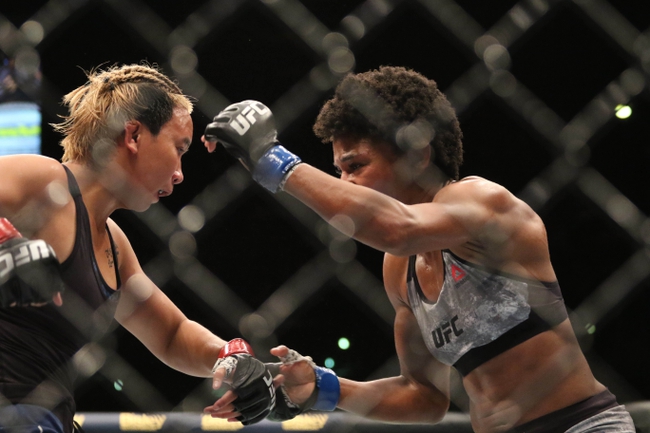 Loma Lookboonmee enters this fight with a 4-2 record and has won 75 percent of her fights by decision. Lookboonmee has split her last four fights and is coming off a February loss to Angela Hill. Lookboonmee is averaging 5.07 significant strikes per minute with an accuracy percentage of 54 percent. Lookboonmee is averaging one takedowns with an accuracy percentage of 28 percent. Lookboonmee is coming off  decision loss at UFC Fight Night 168 where she landed 68 total strikes, 40 percent of her significant strikes and produced one takedown. Lookboonmee is now 1-1 under the UFC banner and hopes to avoid back-to-back losses for the first time in her career. Lookboonmee comes from a kickboxing, boxing and Muay Thai background where she has a pair of gold medals under her belt. Lookboonmee is at her best in the clinch where she loves to throw knees and elbows, and she has decent takedown defense. Lookboonmee can improve on the ground and you’d love her to be a bit more aggressive on the feet, but she’s a nightmare once she gets her hands on her opponent and can control the fight up against the cage. This will be Lookboonmee’s first career fight in Abu Dhabi.

Jinh Yu Frey enters this fight with a 9-5 record and has won 67 percent of her fights by decision. Frey has split her last eight fights and is coming off a June loss against Kay Hansen. Frey is averaging 2.09 significant strikes per minute with an accuracy percentage of 56 percent. Frey is averaging zero takedowns with an accuracy percentage of zero percent. Frey lost hr strawweight debut at UFC on ESPN 12 with a third round submission, a fight where she landed 27 total strikes, 56 percent of her significant strikes and defended nine of 11 takedown attempts. Frey is still looking for her first UFC victory and hopes to avoid back-to-back losses for the first time in her career. Frey is a points fighter for the most part, as eight of her 14 career bouts have gone the distance and four of her last five fights overall. Frey has good enough striking ability to force the issue, but she takes a cautious defensive approach and never really looks to takeover a fight. Frey is solid in the clinch and has good enough BJJ to survive the canvas, but her approach isn’t going to blow anybody away and it usually leads to tough fights to judge. This will be Frey’s first career fight in Abu Dhabi.

I was going to predict a decision in this fight but that line is so heavily juiced it doesn’t make sense. This is going to go a full three rounds and likely be a boring fight for the casual fan. With that said, Lookboonmee is the more aggressive fighter of the two and can control the fight in the clinch where she’ll land some nice elbows and knees. Knowing Frey and her inability to dictate pace, that should be good enough to close the deal.