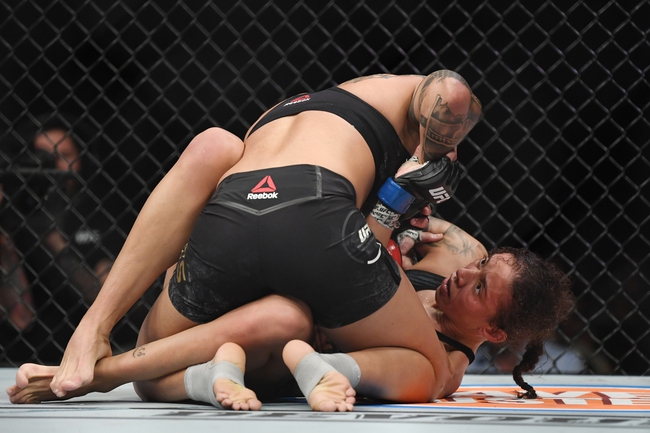 Germaine de Randamie enters this fight with a 9-4 record and has won 56 percent of her fights by decision. de Randamie has won five of her last six fights and is coming off a December loss to Amanda Nunes. de Randamie is averaging 2.72 significant strikes per minute with an accuracy percentage of 47 percent. de Randamie is averaging zero takedowns with an accuracy percentage of zero percent. de Randamie is coming off a decision loss at UFC 245 where she landed 126 total strikes and 54 percent of her significant strikes, but she was taken down eight times. It was a competitive fight for the 36-year-old de Randamie, who is now 7-2 in MMA over the last eight years. de Randamie is a standup striker who has a deep background in kickboxing and boxing, and she’s more than willing to trade in the octagon, as we saw in her victory over Holly Holm a couple of years ago. de Randamie has good footwork and is a rangy fighter who can get in and out nicely and has a 71-inch reach. de Randamie doesn’t have much ground success on the UFC level in terms of numbers, but she has shown quality wrestling in the past and can survive the canvas if needed. de Randamie has only been finished twice despite four career losses. This will be de Randamie’s first career fight in Abu Dhabi.

Julianna Pena enters this fight with a 9-3 record and has won 33 percent of her fights by submission. Pena has won five of her six fights and is coming off a July (2019) win over Nicco Montano. Pena is averaging 2.96 significant strikes per minute with an accuracy percentage of 51 percent. Pena is averaging 2.60 takedowns with an accuracy percentage of 52 percent. Pena is coming off a decision win at UFC Fight Night 155 where she landed 108 total strikes, 50 percent of her significant strikes and produced a pair of takedowns. Pena is now 5-1 under the UFC banner but will fight for just the second time in about three and a half years. Pena missed a lot of time over the years due to becoming a mother, and she pulled out of UFC on ESPN 8 due to an injury. Pena comes from a background in kickboxing and BJJ, and she’s been a rather accurate striker in the UFC. However, Pena can be a bit sloppy with her striking on her feet, as she has this windmill style and it leaves herself open to counters against decent competition. Pena is a successful takedown artist, and it’s where she does some of her best work. Three of Pena’s first four career MMA victories came by submission, but she hasn’t submitted anybody in nearly nine years. This will be Pena’s first career fight in Abu Dhabi.

Pena has been outside of the octagon for a very long time and it’s hard to build a rhythm with the constant breaks in-between fights. de Randamie just went toe-to-toe with possibly the best fighter on the planet, and her striking is head and shoulders better than Pena’s. As long as de Randamie can stay out of the clinch and prevent the takedowns, she should have a field day in this fight. I’m surprised this line is this small, as de Randamie could easily be a much steeper favorite.

Give me de Randamie and the cheap price.