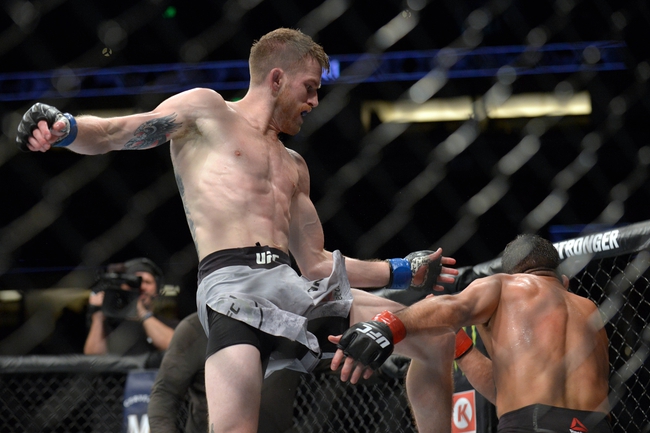 Marlon Moraes enters this fight with a 23-6-1 record and has won 43 percent of his fights by knockout. Moraes has won five of his last six fights and is coming off a December win over Jose Aldo. Moraes is averaging 3.53 significant strikes per minute with an accuracy percentage of 39 percent. Moraes is averaging 0.46 takedowns with an accuracy percentage of 25 percent. Moraes is coming off a split decision victory at UFC 245 where he lands 59 total strikes, 43 percent of his significant strikes and produced a takedown. Moraes is now 5-2 under the UFC banner and has been on the winning side in seven of his eight career decisions. Moraes is a balanced fighter who has raw striking power, a background in Thai boxing, and he’s a back belt in Muay Tahi and BJJ. Moraes is extremely aggressive on his feet, as he pressures forward with combinations, works behind his jab well and deliver strong, heavy kicks. Moraes overwhelms a lot of fighters in this division with his power and pressure style, but he also has above-average wrestling and has four career submission victories with four of those coming by rear-naked choke. One of the best finishers in the lighter divisions, Moraes has several ways to win a fight, and he’s been finished just once himself in the last eight years. This will be Moraes’ first career fight in Abu Dhabi.

Cory Sandhagen enters this fight with a 12-2 record and has won 42 percent of his fights by decision. Sandhagen has won seven of his last eight fights and is coming off a June loss against Aljamain Sterling. Sandhagen is averaging 6.95 significant strikes per minute with an accuracy percentage of 48 percent. Sterling is averaging 1.20 takedowns with an accuracy percentage of 50 percent. Sandhagen is coming off his first career UFC loss at UFC 250 where he was submitted rather quickly with a rear-naked choke. It was the first time Sandhagen has been finished, and he now hopes to avoid back-to-back losses for the first time in his career. Sandhagen has a background in kickboxing and is a brown belt in BJJ. Sandhagen is a bouncy athlete who fights with a lot of energy and isn’t afraid to let his hands go and is highly effective in ground and pound if a fight gets to the canvas. Sandhagen does a wonderful job of closing the distance and is terrific in the clinch where he uses knees and elbows to pick up easy points with judges. A long, rangy fighter, Sandhagen can be a bit unpredictable on the feet and is good enough to hold his own on the ground if he gets taken down. This will be Sandhagen’s first career fight in Abu Dhabi.

Moraes has his balanced attack at plus money is really hard to pass up here, as he’s one of the better finishers in the lighter divisions, has incredible striking and his wrestling can’t be ignored. With that said, Sandhagen has a pretty good size advantage, can fight comfortably out of either stance and that length is sure to give Moraes issues with his pressure style. It feels like Sandhagen can sit back, pick his spots and land some nasty counters in this fight.

I lean toward Sandhagen in this bout.