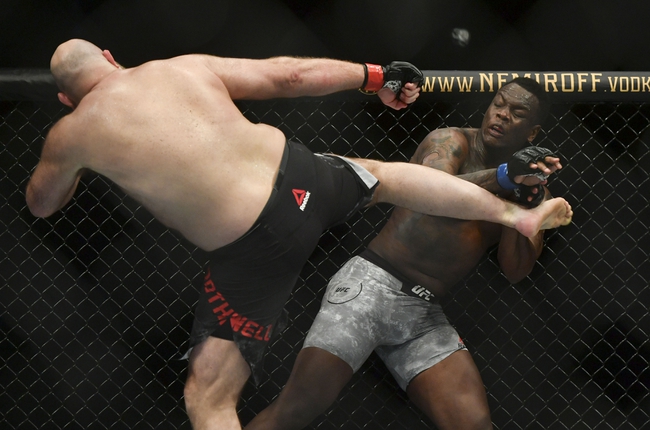 Ben Rothwell enters this fight with a 38-12 record and has won 74 percent of his fights by knockout. Rothwell has won six of his last nine fights and is coming off a May win over Ovince Saint Preux. Rothwell is averaging 3.37 significant strikes per minute with an accuracy percentage of 43 percent. Rothwell is averaging 0.68 takedowns with an accuracy percentage of 33 percent. Rothwell is coming off a decision win at UFC Fight Night 171 that shouldn’t have been a split result, as he landed 86 total strikes, 50 percent of his significant strikes and produced a takedown. Rothwell was in control of the fight from start to finish and should have gotten the victory from every judge. Either way, Rothwell has a chance to get two wins in the calendar year for the first time since 2007. Rothwell is a violent heavyweight who stands at 6’4” and has an 80-inch reach. At almost 39 years old, Rothwell is a violent striker with pure knockout power in his hands, and he uses his legs well for a big guy and has a kickboxing background. Rothwell is terrific in the clinch and does some of his best work when he’s able to back his opponent against the cage, as he showed in his last bout. Rothwell is also a purple belt in BJJ and has six career submissions. Rothwell has good cardio for a big guy, but he has been on the wrong side in four of his last five decisions. This will be Rothwell’s first career fight in Abu Dhabi.

Marcin Tybura enters this fight with a 19-6 record and has won 37 percent of his fights by knockout. Tybura has split his last eight fights and is coming off a July win over Maxim Grishin. Tybura is averaging 3.32 significant strikes per minute with an accuracy percentage of 50 percent. Tybura is averaging 1.69 takedowns with an accuracy percentage of 48 percent. Tybura is coming off a decision win at UFC 251 where he landed 70 total strikes, 46 percent of his significant strikes and produced three takedowns. Tybura is now 6-5 under the UFC banner and looks for three straight victories for the first time since 2016-17. Tybura is a balanced fighter, as he has your typical striking power most heavyweights have, but he's also effective on the canvas with a sharp ground and pound attack and has the ability to force submissions. A black belt in BJJ, Tybura has six career submission victories and four of those were decided by the rear-naked choke. The downside is that Tybura has built a reputation of a questionable chin with four of his six career losses being decided by knockout. This will be Tybura’s second career fight in Abu Dhabi.

Tybura would have the edge in this fight if it went to the canvas given his submission game and his higher level BJJ. However, Rothwell has the edge pretty much everywhere else, and he’s coming off a fight where he absolutely dominated OSP and proved there’s something left in that tank despite approaching 40 years old. Rothwell earned my confidence based on the last time we saw him. I’m on board.

I’ll lay the juice with Rothwell.