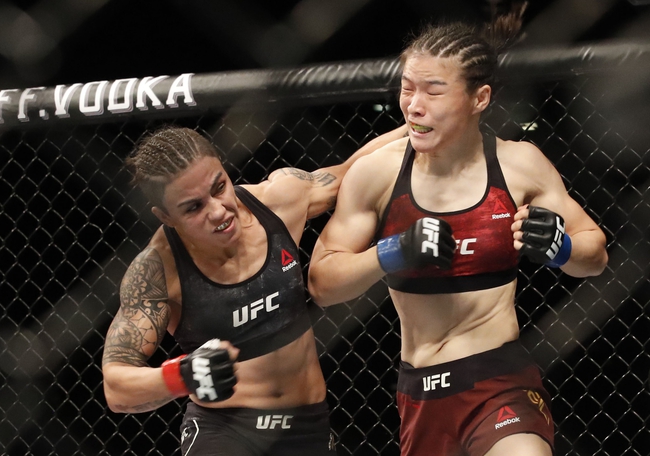 Katlyn Chookagian enters this fight with a 14-3 record and has won 79 percent of her fights by decision. Chookagian has won six of her last eight fights and is coming off a May win over Antonina Shevchenko. Chookagian is averaging 4.19 significant strikes per minute with an accuracy percentage of 35 percent. Chookagian is averaging 0.31 takedowns with an accuracy percentage of 15 percent. Chookagian is coming off a decision win at UFC on ESPN 9 where she landed 200 total strikes and produced three takedowns. Chookagian got her revenge over Shevchenko and is now 7-3 under the UFC banner. Chookagian is most comfortable standing up, as she has some decent striking skills and a background in karate, and she does have two knockouts with her knees. However, Chookagian is more of a points fighter who doesn’t take much risk, doesn’t put much power behind her shots and is looking to do just enough to get a victory with the judges. Chookagian’s fights can be very tough to judge due to the lack of action a lot of the time, and 13 of her 17 career fights have ended in decision. A brown belt in BJJ, Chookagian has never been finished by submission. This will be Chookagian’s first career fight in Abu Dhabi.

Jessica Andrade enters this fight with a 20-8 record and has won 35 percent of her fights by submission. Andrade has won seven of her last 10 fights and is coming off a July loss to Rose Namajunas. Andrade is averaging 6.40 significant strikes per minute with an accuracy percentage of 49 percent. Andrade is averaging 3.02 takedowns with an accuracy percentage of 57 percent. Andrade lost a split decision bout at UFC 251 where she landed 79 total strikes, 34 percent of her significant strikes and produced one takedown. The bout received fight of the night honors, and Andrade looks to avoid three straight losses for the first time in her career. Andrade is a pressure fighter who usually gets the best of her opponent on her feet with constant wild punches and a lot of pop behind her strikes. Andrade is violent standing up and has a great ground and pound, and while she’s known for her striking, she’s also a successful takedown artist with seven submission victories on her resume. A black belt in BJJ, Andrade has the upper body strength to get a fight wherever she wants it and her aggressiveness and brute power makes her one of the scarier fighters on the women’s side. This will be Andrade’s second career fight in Abu Dhabi.

Chookagian showed some aggressiveness in her last fight that gives you some confidence heading into this bout, as usually she’s a bit conservative with her offense and doesn’t force the issue much. Chookagian has a size advantage and a six-inch reach advantage, so there’s a path to victory. However, Andrade is still the aggressor in this fight, has a serious power edge and would have the advantage in the clinch or if this fight ends up on the ground. Andrade is just the more powerful fighter in all areas of this fight and has the higher finish rate. Chookagian is going to struggle to keep the pace in this fight and could fold if she gets tagged with something clean.

Andrade in the slight favorite role feels like a steal.