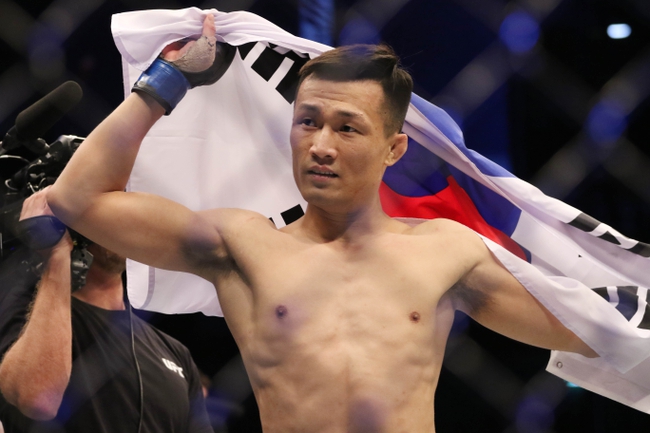 Brian Ortega enters this fight with a 14-1 record and has won 50 percent of his fights by submission. Ortega has won five of his last six fights, and he’s coming off a December (2018) loss against Max Holloway. Ortega is averaging 4.07 significant strikes per minute with an accuracy percentage of 33 percent. Ortega is averaging 0.51 takedowns with an accuracy percentage of 16 percent. Ortega is coming off his first career loss at UFC 231 where he was stopped in the fourth round, a bout that earned fight of the night honors. Ortega is coming off a knee injury that took him out of UFC on ESPN+ 23, and it’s going to be interesting to see how he responds not only from his first career loss but also so much time outside of the octagon. Ortega has certainly improved his striking in his last few fights, as he used to be a bit wild and carless with his hands, opening the door to counters and leading to subpar defense. Ortega just hung his own with Holloway on the feet, landing 112 total strikes and 37 percent of his significant strikes. Ortega is most dangerous with his legs and his ground game, as he kicks well and can find a submission hold just about anywhere. A black belt in BJJ, Ortega doesn’t need much of an opening to end a fight and has won three of his last five victories have come by submission. Ortega is extremely dangerous on the canvas and four of his seven submissions have come by the triangle choke. This will be Ortega’s first career fight in Abu Dhabi.

Chan Sung Jung enters this fight with a 16-5 record and has won 50 percent of his fights by submission. Jung has won six of his last eight fights and is coming off a December win over Frankie Edgar. Jung is averaging 4.58 significant strikes per minute with an accuracy percentage of 41 percent. Jung is averaging 0.78 takedowns with an accuracy percentage of 41 percent. Jung is coming off a first round knockout at UFC Fight Night 165 that earned performance of the night honors. Jung has earned performance bonuses in seven of his last eight fights and each of his last three victories have been first round knockouts. Jung now looks for three straight wins for the first time since 2011-12. Jung is a creative striker on his feet with obvious power, and he has a background in kickboxing along with a black belt in Taekwondo and a brown belt in BJJ. Jung is comfortable trading in the pocket, as he’ll take a shot and keep coming forward and his last few fights are only going to give him more confidence. Jung can also hold his own in the clinch and on the ground, as he has eight career submission victories and his first pro fight ended with a reverse armbar. This will be Jung’s first career fight in Abu Dhabi.

Ortega is a dangerous fighter here given his improved striking, his ability to switch stances and his ground game that often results in a submission lock. However, Ortega hasn’t fought in nearly two years and I usually avoid fighters who have so much time outside of the octagon. Jung is the longer striker, has more power in his shots and he’s a lot more technical with his offense, defending shots at a much higher clip. I trust Jung more than I do Ortega, who can be a bit too wild and that style usually pays against above-average fighters.

I’ll lay the cheap price with the Korean Zombie.