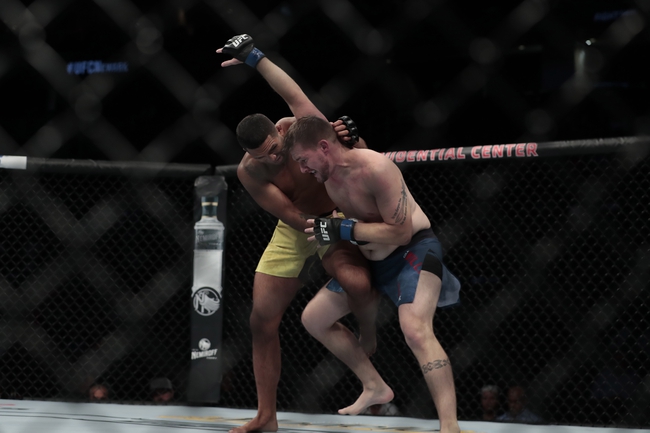 Claudio Silva enters this fight with a 14-1 record and has won 64 percent of his fights by submission. Silva has won 14 straight fights and is coming off an August (2019) win over Cole Williams. Silva is averaging 2.80 significant strikes per minute with an accuracy percentage of 51 percent. Silva is averaging 3.32 takedowns with an accuracy percentage of 33 percent. Silva is coming off a first round submission win at UFC on ESPN 5 where he also landed 32 total strikes. Silva is now 5-0 under the UFC banner and hasn’t lost a fight overall since his pro debut back in 2007. Silva is a 38-year-old who has a black belt in BJJ and is at his best when he’s grappling or on the ground. Silva has nine career submission victories and five of those wins have come by rear-naked choke. Silva usually gets the fight where he wants it and he doesn’t waste much time, as nine of his 14 career wins have taken place in the first round. When you consider Silva’s only career loss was a disqualification due to an illegal elbow, Hannibal has never clearly lost a fight in his MMA career. This will be Silva’s first career fight in Abu Dhabi.

James Krause enters this fight with a 27-8 record and has won 52 percent of his fights by submission. Krause has won six of his last seven fights and is coming off a February loss to Trevin Giles. Krause is averaging 4.65 significant strikes per minute with an accuracy percentage of 48 percent. Krause is averaging 1.05 takedowns with an accuracy percentage of 18 percent. Krause lost his middleweight debut at UFC 247 in a split decision where he landed 59 total strikes, 55 percent of his significant strikes and produced a takedown. The loss drops Krause to 8-6 under the UFC banner and he hopes to avoid back-to-back losses for the third time in his career. Krause is a balanced fighter who has some power in his strikes and has been highly accurate with his significant shots and has only been knocked out once in his career. A black belt in BJJ, Krause is also polished on the ground where he’s produced 14 career submissions, with five of those coming by triangle choke. Krause is a veteran in the game and has a chance to win at least one fight for the 10th straight year. This will be Krause’s first career fight in Abu Dhabi.

Krause should be the favorite here because he’s the bigger fighter with the longer reach, he lands more strikes and is simply the more balanced fighter with his stand up ability to go along with his grappling and ground game. However, we’re getting Silva, a guy who hasn’t truly lost a pro MMA fight in his career at plus money. On paper, Krause has more ways to win this fight and that makes him the favorite, but there’s value with Silva in the underdog role.

I’ll take my chances with Silva at this price.