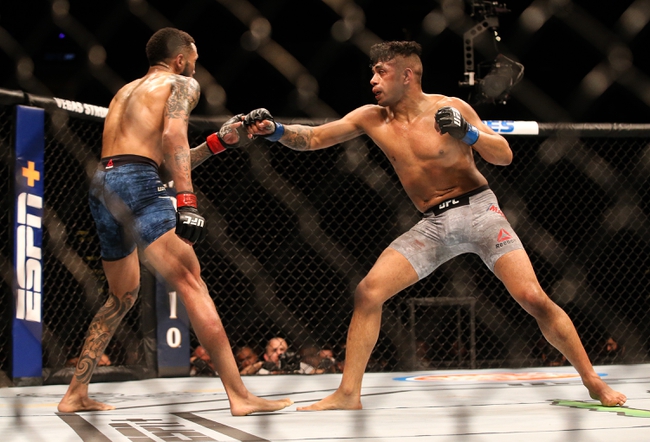 Thomas Almeida enters this fight with a 21-3 record and has won 81 percent of his fights by knockout. Almeida has split his last six fights and is coming off a January (2018) loss to Rob Font. Almeida is averaging 5.66 significant strikes per minute with an accuracy percentage of 45 percent. Almeida is averaging zero takedowns with an accuracy percentage of zero percent. Almeida is coming off a brutal knockout loss at UFC 220 where he was kicked in the head and finished with ground and pound. That was the last time we saw Almeida in the octagon, as he was dealing with eye issues that required surgery to improve his vision. Almeida hasn’t won a fight since UFC Fight Night 100, which was four years ago. It’s going to be interesting to see what sort of form Almeida is in right now given the time outside of the octagon. Almeida is an athletic fighter with a brown belt in BJJ and a black belt in May Thai, and he has serious knockout power while defending takedowns well. Almeida wants a fight standing up where he can throw a wide variety of strikes, and 16 of his 20 career finishes have taken place in the first round. This will be Almeida’s first career fight in Abu Dhabi.

Jonathan Martinez enters this fight with a 1-3 record and has won 58 percent of his fights by knockout. Martinez has won five of his last seven fights and is coming off an August win over Frankie Saenz. Martinez is averaging 4.22 significant strikes per minute with an accuracy percentage of 50 percent. Martinez is averaging 0.64 takedowns with an accuracy percentage of 37 percent. Martinez is coming off a third round knockout at UFC Fight Night 173 where he landed 88 total strikes, 59 percent of his significant strikes and produced a takedown. Martinez is jumping right back into the octagon a couple months later, and he’s now 3-2 under the UFC banner. Martinez is a sneaky athletic fighter who does his best work standing up, as he has power in his hands and throws elbows and flying knees out of nowhere. A bit unpredictable on his feet, Martinez started his pro career with five straight knockouts. Martinez also has some scrambling ability on the canvas and entered the UFC producing back-to-back armbar finishes, so he has some balance to his attack. A blue belt in BJJ, Martinez’s two career losses have come by decision. This will be Martinez’s first career fight in Abu Dhabi.

This should be a fun fight between two southpaws who do their best work on their feet and have high finish ability. I can understand why Almeida would be the favorite given the power edge. However, there’s a lot of question marks surrounding Almeida. Not only the eye issue, but we haven’t seen Almeida fight in over two years, and we haven’t seen him win in four years. We just saw Martinez a couple of months ago, and he looked solid. Martinez would also have an edge here in the clinch and has some takedown ability that can’t completely be ruled out here.

I don’t like backing fighters with a lot of questions. Because of that, I lean toward Martinez and the slight plus money.