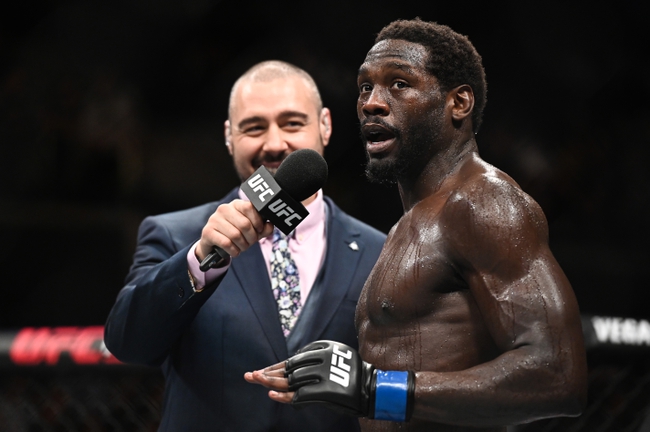 Robert Whittaker and Jared Cannonier fight Saturday in UFC 254 at the Flash Forum.

Robert Whittaker enters this fight with a 21-5 record and has won 43 percent of his fights by knockout. Whittaker has won 10 of his last 11 fights and is coming off a July win over Darren Till. Whittaker is averaging 4.51 significant strikes per minute with an accuracy percentage of 40 percent. Whittaker is averaging 0.46 takedowns with an accuracy percentage of 30 percent. Whittaker is coming off a decision win at UFC on ESPN 14 where he landed 100 total strikes, 43 percent of his significant strikes and produced two takedowns. Whittaker has now won each of his last six decisions and seven of his nine career decisions. Whittaker looks to win two fights in the same calendar year for the first time since 2017. Whittaker is a high volume, powerful striker who has knockout power, and he’s a black belt in Hapkido and Gōjū-ryū. Whittaker is more than willing to trade blows in the octagon, and despite sometimes being hit more than you’d like to see, he’s only been knocked out twice in his career. Whittaker also has a wrestling background and is a brown belt in BJJ, so he’s more than comfortable on the canvas and his conditioning is some of the best in the middleweight division. This will be Whittaker’s second career fight in Abu Dhabi.

Jared Cannonier enters this fight with a 13-4 record and has won 69 percent of his fights by knockout. Cannonier has won nine of his last 13 fights and is coming off a September (2019) win over Jack Hermansson. Cannonier is averaging 3.72 significant strikes per minute with an accuracy percentage of 51 percent. Cannonier is averaging 0.18 takedowns with an accuracy percentage of 33 percent. Cannonier is coming off a second round knockout at UFC Fight Night 160 that earned performance of the night honors. Cannonier landed 29 total strikes in the bout, and he’s now won three straight fights, with his last four wins overall being knockouts. However, Cannonier has been out of work for a while and was recovering from a torn pectoral muscle, so it’s going to be interesting to see how he responds. Cannonier is an athletic pressure fighter with good work rate and cardio, and he has clear power in his hands and legs. Cannonier throws bombs standing up, but he’s also effective in the clinch and can more than hold his own on the canvas where he has good takedown ability and has three career submission victories. Cannonier is a balanced fighter who has been impressive at the middleweight division. This will be Cannonier’s first career fight in Abu Dhabi.

This should be a ridiculous fight and you can make a case for both sides. Whittaker was highly impressive his last time out and we usually don’t get him at prices this cheap. Cannonier has been on the rise the last few years, but he is coming off an injury that’s kept him out of the octagon for more than a year. With that said, I still give Cannonier the edge, as he has a five-inch reach advantage, has more pop at this stage and is comfortable switching stances. Cannonier is also the more accurate striker, has slightly better head movement and I’d give him the edge as well if this fight went to the ground. Either way, Cannonier’s length is likely the deciding factor in this bout.