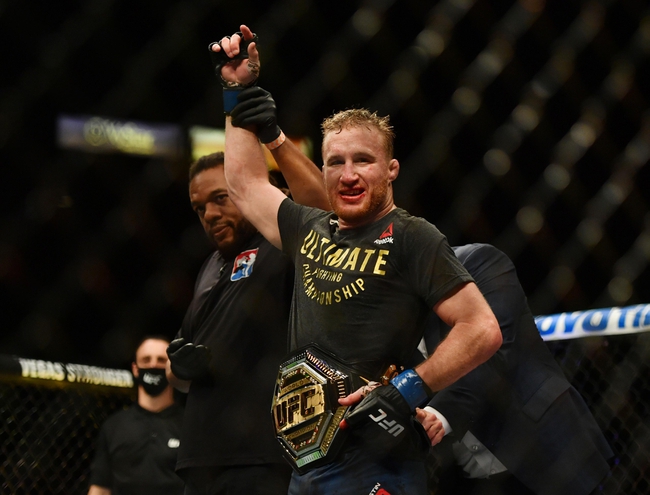 Khabib Nurmagomedov and Justin Gaethje fight Saturday in UFC 254 at the Flash Forum.

Khabib Nurmagomedov enters this fight with a 28-0 record and has won 36 percent of his fights by decision. This will be Khabib’s fourth fight since 2018, and he’s coming off a September (2019) win over Dustin Poirier. Khabib is averaging 4.11 significant strikes per minute with an accuracy percentage of 49 percent. Khabib is averaging 5.35 significant strikes per minute with an accuracy percentage of 47 percent. Khabib is coming off a victory in UFC 242 where he controlled the fight from start to finish, out striking his opponent, producing seven takedowns and winning in the third round with a rear-naked choke. Khabib has now won three of his last four fights by submission. There’s nothing that can’t be said about Khabib that hasn’t already been said, as he’s relentless with his takedown attempts and almost always gets the fight where he wants it, making it very difficult for his opponent to get comfortable and develop a rhythm. Khabib is an absolute bear once he gets his hands on an opponent, as he controls the rest of the round and just wears him down. Khabib is not great on his feet, but he closes distance well and has decent enough head movement that allows him to survive the moment. There’s no tricks with Khabib, as his opponent better be a terrific wrestler and have a wonderful gas tank, or it’s going to be a long night. Khabib may not have much balance to his attack, but he’s as good as it gets when it comes to mastering his craft, and you could argue he has the best ground game of any fighter in the sport. This will be Khabib’s second career fight in Abu Dhabi.

Justin Gaethje enters this fight with a 22-2 record and has won 86 percent of his fights by knockout. Gaethje has won 11 of his last 13 fights and is coming off a May win over Tony Ferguson. Gaethje is averaging 7.74 significant strikes per minute with an accuracy percentage of 59 percent. Gaethje is averaging zero takedowns with an accuracy percentage of zero percent. Gaethje is coming off a fifth round knockout at UFC 249 where he landed 143 total strikes and 72 percent of his significant strikes. Gaethje basically did to Ferguson what Ferguson is known for doing to others, as he destroyed his face and forced the ref to eventually stop things. Gaethje has shown throughout his career that the striking power and the chin is there for him to hold his own with anybody standing up and he’s clearly most comfortable on his feet. Gaethje can give and take a beating, and he loves coming forward with pressure, making his opponent uncomfortable and forcing them to counter if they want to stay in the fight. However, Gaethje comes from a wrestling background and has a trainer who works relentlessly on technique, so at some point you’d think his ground game would come into play. At this point, Gaethje seems to be 100 percent dedicated to his standup and wants to head hunt. This will be Gaethje’s first career fight in Abu Dhabi.

Khabib is obviously going to be the favorite because of his track record. No matter the style of fighter, it’s the same song and dance with Khabib, as he closes the distance, gets the takedown and controls the fight with ease. We probably shouldn’t expect anything different here. However, in terms of betting value, Gaethje and the big plus money is probably the way to go. Gaethje and his stand up is so good that he has a punchers chance to land something clean and end this thing before it gets to the canvas. Also, Gaethje is a terrific wrestler who just hasn’t shown it up to this point, so while he’s been a striker in the UFC, you have to have some sort of confidence he can hold his own if it goes to the ground. Gaethje is the more balanced fighter overall and has a clear, clear edge standing up.

I’ll take a shot with Gaethje and the big potential payout.