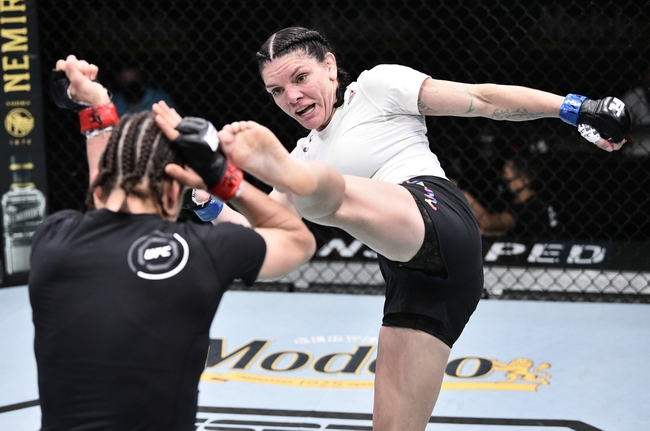 Lauren Murphy and Liliya Shakirova fight Saturday in UFC 254 at the Flash Forum.

Lauren Murphy enters this fight with a 13-4 record and has won 62 percent of her fights by knockout. Murphy has won five of her last seven fights and is coming off a June win over Roxanne Modafferi. Murphy is averaging 3.88 significant strikes per minute with an accuracy percentage of 39 percent. Murphy is averaging 1.14 takedowns with an accuracy percentage of 35 percent. Murphy is coming off a decision victory at UFC on ESPN 11 where she landed 92 total strikes, 45 percent of her significant shots and produced two takedowns. Murphy is now 5-4 under the UFC banner and has a chance to win four straight fights for the first time since 2013. Murphy started her pro career with very little experience, and she’s become an effective striker with knockout pop and uses her knees and elbows extremely well. A purple belt in BJJ, Murphy is also an effective grappler with decent takedown defense, but none of her 17 career fights have ended in a submission. At now 37 years old, Murphy is starting to make a dent in this division and it will be interesting to see how long she can keep this up. This will be Murphy’s first career fight in Abu Dhabi.

Liliya Shakirova enters this fight with a 8-1 record and has won 50 percent of her fights by decision. Shakirova has won her last three fights and is coming off an October (2019) win over Aygul Abduvakhid. Shakirova last fought a year ago at Gorilla Fighting 18 where she produced a second round knockout, and she’s catching this fight on a very short notice. Shakirova makes her UFC debut here after Cynthia Calvillo was forced to withdraw due to testing positive for COVID-19. Shakirova doesn’t have a whole lot of impressive wins on her resume, but she’s proven to be a well rounded fighter who will let her hands go at times, throw in some impressive spinning kicks and comes from a wrestling background. Shakirova is a freestyle wrestling campion who knows her way around the canvas and has been effective with her takedowns up to this point. Shakirova also has some decent cardio that’s helped her win four of her five career decisions.

This division is so up the air and open for the taking that Shakirova winning and moving up rather quickly would shock nobody. However, this is a tall order for Shakirova in her debut, as she’s fighting a grizzly veteran on short notice. It also doesn’t help that Murphy has found the fountain of youth lately and is on a bit of a roll, as she chases a possible shot at the title. Murphy is confident and has her eye on the prize, making this a tough ask for Shakirova on short notice.