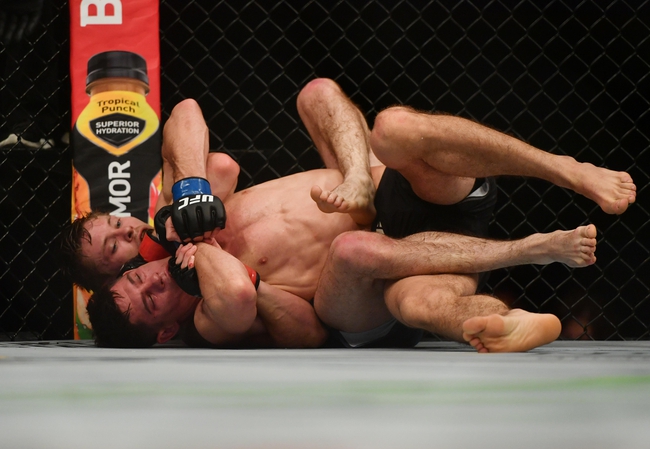 Andre Fili enters this fight with a 21-7 record and has won 43 percent of his fights by knockout. Fili has won five of his last seven fights and is coming off a June win over Charles Jourdain. Fili is averaging 3.90 significant strikes per minute with an accuracy percentage of 36 percent. Fili is averaging 2.71 takedowns with an accuracy percentage of 49 percent. Fili is coming off a split decision win at UFC Vegas 2 where he landed 52 total strikes, 25 percent of his significant strikes and had five takedowns. Fili has now seen eight of his last nine fights end in decisions, and he’s fighting for the third time this year. Fili is a wild athlete who has a high work rate and is most comfortable on his feet due to a street fighting background. Fili has legit knockout power in his hands and mixes in strong leg kicks as well, but he has just one knockout in the last four years. Fili has impressive conditioning for a guy who fights the way he does, and it’s allowed him to win nine of his 12 career decisions. Fili is also a successful takedown artist with decent grappling ability, and he has above-average takedown defense. This will be Fili’s fourth career fight in Las Vegas.

Bryce Mitchell enters this fight with a 13-0 record and has won 69 percent of his fights by submission. This will be Mitchell’s fourth fight since 2019, and he’s coming off a May win over Charles Rosa. Mitchell is averaging 2.05 significant strikes per minute with an accuracy percentage of 59 percent. Mitchell is averaging 2.13 takedowns with an accuracy percentage of 41 percent. Mitchell is coming off a decision win at UFC 249 where he landed 60 total strikes, 81 percent of his significant strikes and had three takedowns. It was a complete one-sided fight, and Mitchell has now seen four of his last five bouts end in decisions. Mitchell has yet to lose a fight since making his pro debut in 2015, and he’s 4-0 under the UFC banner. Mitchell is most known for his ground game and finishing ability, and he has a black belt in BJJ. Mitchell goes for the takedown as soon as there’s an opening and he has four combined takedowns in his last two fights. Mitchell comes from a wrestling background and began his MMA career with eight straight submissions. It also can’t be overlooked that Mitchell has great footwork standing up and can hold his own from a striking standpoint if needed. This will be Mitchell’s second career fight in Las Vegas.

Fili is a bit of a live dog in this fight because of his length, his reach advantage and probably the striking advantage on the feet. Fili also defends takedowns well and can scramble a bit on the ground to hold his own on the canvas. And while they all came earlier in his career, Fili does have three career submission victories. Still, Mitchell has been highly impressive through four UFC fights and looks like he could be fighting for a title sometime soon. Mitchell has an edge on the ground and usually controls fights once he gets his hands on his opponent. Fili is the more flashy fighter and has a punchers chance here, but this feels like a fight Mitchell should be able to control on the ground or in the clinch and pull out a decision.