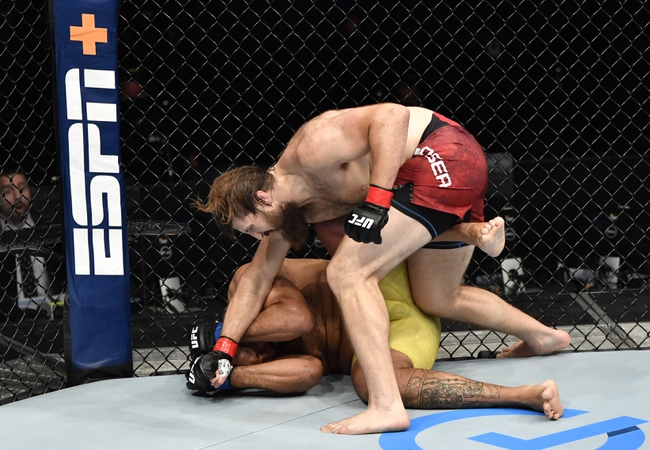 Tanner Boser enters this fight with a 19-6-1 record and has won 53 percent of his fights by knockout. Boser has won four of his last five fights and is coming off a July win over Raphael Pessoa. Boser is averaging 4.54 significant strikes per minute with an accuracy percentage of 54 percent. Boser is averaging zero takedowns with a accuracy percentage of zero percent. Boser is coming off a second round knockout win at UFC on ESPN 14 where he landed 43 total strikes and 71 percent of his significant strikes. The performance earned performance of the night honors, and Boser is now 3-1 under the UFC banner overall. Boser has a chance to win three fights this year, putting himself in impressive company. Boser is a black belt in Shitō-ryū and a purple belt in BJJ. Boser relies on his cardio, hand speed and leg kicks. A total of 48 percent of Boser’s significant strikes in his last bout were to the legs. Boser has quickness for this division and three of his last four victories have come by knockout. Boser grew up studying karate, so leg kicks and footwork is a big part of his game, and he’s never been submitted in his career. This will be Boser’s second career fight in Las Vegas.

Andrei Arlovski enters this fight with a 29-19 record and has won 59 percent of his fights by knockout. Arlovski has lost five of his last seven fights and is coming off a May win over Philipe Lins. Arlovski is averaging 3.54 significant strikes per minute with an accuracy percentage of 44 percent. Arlovski is averaging 0.50 takedowns with an accuracy percentage of 36 percent. Arlovski is coming off a decision win at UFC Fight Night 171 were he landed 50 total strikes and 46 percent of his significant strikes. It was a needed victory, and Arlovski now looks for back-to-back wins for the second time since 2016. Arlovski is an accurate striker who comes from a sambo, judo and kickboxing background. Arlovski hasn’t had a knockout win since UFC 187, but the power is still there despite him trying 42 years old early next year. Arlovski is effective in the clinch, has high level takedown defense and his grappling is about as good as it gets in the heavyweight division. The concern with Arlovski has always been his chin, as he’s been knocked out 11 times in 19 career losses. This will be Arlovski’s 10th career fight in Las Vegas.

You can never count out a veteran such as Arlovski who has seen it all and still has the tools to get the job done when he’s feeling good. Arlovski would have the edge here in the clinch and if somehow this fight ended up on the ground. The issue is Arlovski isn’t getting any younger and the subpar results are becoming a trend. Boser is the quicker, younger fighter with the power edge. This feels like a fight where Boser will pick apart Arlovski with leg kicks and possibly land the power shot that wins the fight. Either way, Boser should win this bout.

Boser wins his third fight of the year.