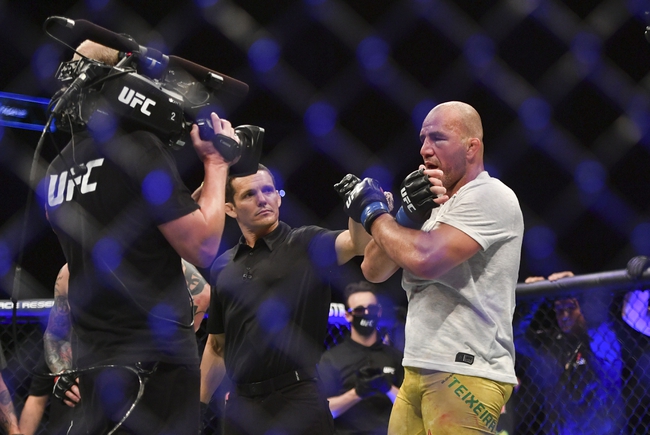 Thiago Santos enters this fight with a 21-7 record and has won 71 percent of his fights by knockout. Santos has won eight of his last 10 fights and is coming off a July (2019) loss to Jon Jones. Santos is averaging 4.44 significant strikes per minute with an accuracy percentage of 47 percent. Santos is averaging 0.83 takedowns with an accuracy percentage of 40 percent. Santos is coming off a split decision loss at UFC 239 where he landed 43 total strikes and 25 percent of his significant strikes. Santos was rather competitive in the fight and it was even more impressive when you consider he tore pretty much everything in his left leg and partially tore his right ACL. It’s why Santos has been out of the octagon for about a year and a half. Santos now hopes to avoid back-to-back losses for the second time in his career. There’s no secrets when it comes to Santos, as he’s pure knockout power and wants a fight standing up where he can unload and hope one of those shots will land. While a black belt in Muay Thai and Brazilian jiu-jitsu, Santos doesn’t tap into his ground game often and has actually produced just five takedowns on the UFC level. Santos is throwing bombs and eight of his last nine wins have been knockouts. Santos will also throw in some strong body kicks, but it’s going to be interesting to see if the athleticism is still there after such injuries. This will be Santos’ seventh career fight in Las Vegas.

Glover Teixeira enters this fight with a 31-7 record and has won 58 percent of his fights by knockout. Teixeira has won five of his last six fights and is coming off a May win over Anthony Smith. Teixeira is averaging 3.74 significant strikes per minute with an accuracy percentage of 47 percent. Teixeira is averaging 1.87 takedowns with an accuracy percentage of 38 percent. Teixeira is coming off a fifth round knockout at UFC Fight Night 171 where he landed 202 total strikes, 61 percent of his significant strikes and produced a takedown. Teixeira simply overwhelmed Smith in a fight that probably should have been stopped earlier, and he even knocked out some teeth. While now 41 years old, Teixeira has won four straight fights and is showing there’s more than enough left in the tank to challenge this division. Teixeira has proven his versatility over his career, as he lands accurate and powerful punches that allow him to fight standing up, mixes in leg kicks well, and he's a successful takedown artist with eight submission victories under his belt. With a deep background in Kajukenbo, there’s nothing Teixeira can’t do in the octagon and he’s far from your typical heavyweight who just throws haymakers and hopes to knock the lights out. Teixeira isn’t going to knock the lights out these days, but his work rate is impressive and he controls the canvas with vicious ground and pound. This will be Teixeira’s fourth career fight in Las Vegas.

This line is rather surprising when you consider how Teixeira has looked in his last few fights and the serious injuries Santos is coming back from. Yes, Santos is the safer bet under normal circumstances, as he has a clear power edge, is younger and just hung around with arguably the best fighter in the world. However, Santos pretty much destroyed his entire left leg and has been out of the octagon for the last 16 months. Teixeira has been on a role lately and is fresh off beating one the tougher heavyweights in the UFC while earning performance of the night.

Not sure how you turn down Teixeira and the value of the plus money.