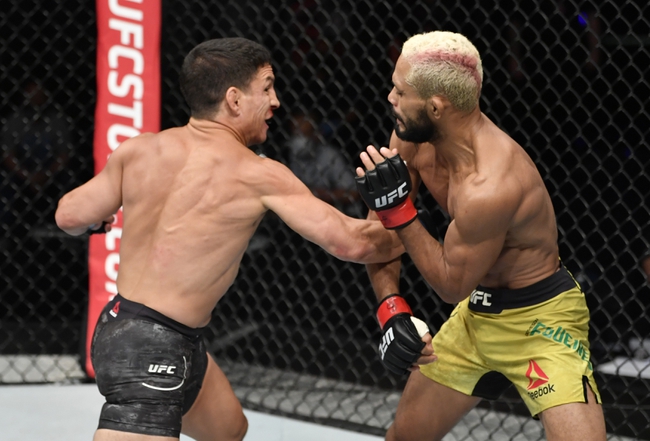 Deiveson Figueiredo and Alex Perez fight Saturday in UFC 255 at the UFC APEX.

Deiveson Figueiredo enters this fight with a 19-1 record and has won 47 percent of his fights by knockout. Figueiredo has won six of his last seven fights and is coming off a July win over Joseph Benavidez. Figueiredo is averaging 2.80 significant strikes per minute with an accuracy percentage of 55 percent. Figueiredo is averaging 1.71 takedowns with an accuracy percentage of 50 percent. Figueiredo is coming off a first round submission win at UFC Fight Night 172 that earned performance of the night honors. Figueiredo has now won four straight fights and has a chance to win his third fight this year alone. Each of Figueiredo’s last three fights have been finishes. Figueiredo is a balanced fighter who has great takedown ability, can fight from his back and is quite slippery on the canvas with his scrambling ability. Figueiredo has solid wrestling and has seven career submissions with four of them coming via guillotine choke. Figueiredo is also skilled on the feet with knockout power and solid head movement that make it tough for an opponent to land cleanly. At nearly 33 years old, Figueiredo has more than proven he’s one of the best and possibly most underrated fighter in the sport currently. This will be Figueiredo’s first career fight in Las Vegas.

Alex Perez enters this fight with a 24-5 record and has won 50 percent of his fights by decision. Perez has won 11 of his last 12 fights and is coming off a June win over Jussier Formiga. Perez is averaging 4.68 significant strikes per minute with an accuracy percentage of 47 percent. Perez is averaging 3.03 takedowns with an accuracy percentage of 50 percent. Perez is coming off a first round knockout at UFC 250 that earned performance of the night. Perez has seen such honors in his last two fights, and he’s won his last three fights overall. Perez comes from a wrestling background while also having experience in BJJ and boxing. Perez has accurate striking and showed terrific leg kicks in his last fight, but his high takedown percentage and high takedown defense makes him tough, as he determines where the fight ends up. Perez is effective in the clinch and his impressive gas tank has allowed him to win 12 of his 13 career decisions. Perez has lost just one fight over the last four years and is 7-1 under the UFC banner overall. This will be Perez’s second career fight in Las Vegas.

This should be a fun fight between two highly underrated fighters, above average wrestlers and guys who have the stamina to be effective throughout each round. The difference for me here is that Figueiredo has more balance to his attack, as we know about his wrestling, but his striking has improved greatly over the years and he’s confident he can get finishes on the feet. Figueiredo is also the bigger fighter of the two with a longer reach, so Perez will have to go through some shots to close the distance. This line isn’t showing Perez much respect, but Figueiredo is on such a roll that I’m not looking to bet against him right now.

I’ll take Figueiredo to win within distance to shave down the ML price.