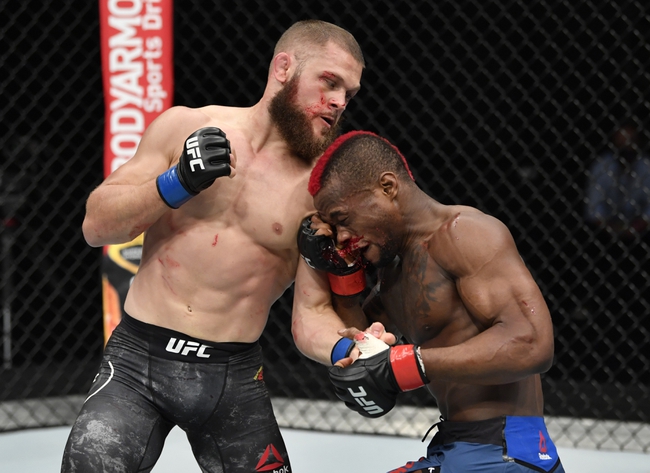 Rafael Fiziev and Renato Moicano fight Saturday in UFC 256 at the UFC APEX.

Rafael Fiziev enters this fight with a 8-1 record and has won 63 percent of his fights by knockout. Fiziev has won four of his last five fights and is coming off a July win over Marc Diakiese. Fiziev is averaging 4.61 significant strikes per minute with an accuracy percentage of 56 percent. Fiziev is averaging 0.95 takedowns with an accuracy percentage of 66 percent. Fiziev is coming off a decision win at UFC Fight Night 172 that earned fight of the night honors. Fiziev landed 82 total strikes, 62 percent of his significant strikes and had a takedown in the victory. Fiziev is now 2-1 under the UFC banner and both of those wins came by decision. A blue belt in BJJ, Fiziev is a fighter who relies heavily on his Muay Thai and kickboxing background, and he has some incredible finishes on his feet due to his athleticism and speed. Fiziev has good defense on the feet as well and above average head movement. While Fiziev wants a fight standing up and has shown impressive takedown defense, he does have a submission victory on his small pro resume and has displayed a confident ground and pound attack as well. This will be Fiziev’s first career fight in the United States.

Renato Moicano enters this fight with a 14-3-1 record and has won 50 percent of his fights by decision. Moicano has split his last six fights and is coming off a March win over Damir Hadzovic. Moicano is averaging 5.49 significant strikes per minute with an accuracy percentage of 46 percent. Moicano is averaging 1.34 takedowns with an accuracy percentage of 58 percent. Moicano is coming off a first round submission in his lightweight debut at UFC Fight Night 170 that was decided in under a minute. Moicano is now 6-3 under the UFC banner and looks to win two fights in the same year for the first time since 2018. Moicano is an athletic fighter who has displayed good accuracy in his strikes and does some of his best work standing up. However, Moicano is most known for his ground game, as he’s aggressive and accurate with his takedowns, and all 14 of his wins have come by decision or submission. A black belt in BJJ, Moicano is averaging over 10 minutes per fight and about a takedown per 15 minutes, so he’s built for the long game and is well conditioned to be effective when most fighters are sucking wind. Moicano is a slippery, lengthy fighter who is hard to get comfortable against and his last fight certainly turned some heads. This will be Moicano’s first career fight in Las Vegas.

Moicano has some value in the underdog role given his impressive gas tank, his higher level of BJJ and the clear edge in grappling. Moicano can drag his opponent into those deep waters and we’re well aware about the finish ability. However, Fiziev has the striking style that makes it tough to close the distance with his ability to switch stances and his kicks. Fiziev has also shown high level takedown defense, so it’s not a guarantee Moicano can get this fight where he wants it. Moicano is going to have a hard time dictating this fight.

Give me Fiziev and the cheap price.