Conor “The Notorious” McGregor and Dustin “The Diamond” Poirier are the main-event at UFC 257 on Saturday, January 23, 2021 on PPV.

In this lightweight (155lb) bout, we have Conor McGregor vs. Dustin Poirier. McGregor is fighting out of Dublin, Ireland.  Connor won his last fight against Donald “Cowboy" Cerrone with a spectacular first round finish. He is entering this bout as a -302 favorite. He has a professional MMA record of 22-4-0. McGregor has 19 wins by KO/TKO (86%), 1 submission (5%), and 2 decisions (9%).

Poirier is entering this fight as a +232 underdog. He is fighting out of Carencro, Louisiana. His professional MMA record is 26-6-0. In Poirier’s last bout, he won against Dan Hooker via decision. Prior to the Hooker fight, Poirier lost to Khabib Nurmangomedov via rear naked choke in the third round. Poirier has 12 wins via KO/TKO (46%), 7 submissions (27%), and 7 decisions (27%).

I have been excited about this fight for a while now. The winner of this bout will be fighting for the lightweight championship. In 2014, Dustin was knocked out by McGregor in the first round. If Poirier is able to survive the first round, Conor's stamina will begin to diminish. I don’t predict Dustin getting knocked out in the first round, but I don’t see him winning this fight. My best advice if you want to bet on Poirier is wait until last second. A lot of money is coming in on McGregor. McGregor originally opened as a -180 favorite and is currently at -302. If you want to stay away from Poirier and want a value pick, my pick is... 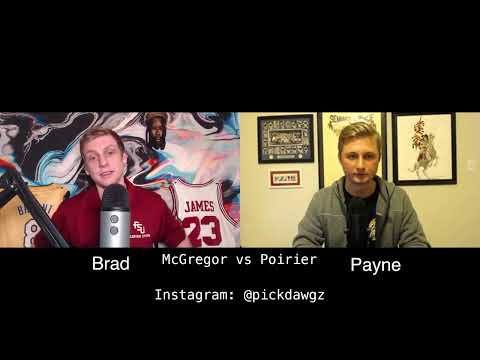