In this bantamweight (125lb) bout, we have Karol Rosa vs. Joselyne Edwards. Rosa is fighting out of Vila Velha, Brazil. She is entering this bout as a -240 favorite. She is currently on a four fight winning streak and has notable wins over Vanessa Melo, Lara Fritzen Procopio and Gisele Moreira. She has a professional MMA record of 13-3-0 and has 4 wins by KO/TKO (31%), 2 submissions (15%), and 7 decisions (54%).

Edwards is fighting out of Panama. She is entering this fight as a +200 underdog. She is currently on a two fight win streak. She made her UFC debut less than two weeks ago and won her last bout against Yanan Wu. She has a professional MMA record of 10-2-0 and has 5 wins via KO/TKO (50%), 3 submissions (30%), and 2 decisions (20%).

In Edwards last fight, her stamina began to diminish in the third round. This is concerning because her fight was less than two weeks ago. After her stand up brawl against Yanan Wu, I think Edwards is rushing into this fight too fast. She didn't get enough rest. Rosa is a Brazilian Jiu Jitsu black belt. In her last fight against Melo, she had a lot of success with takedowns. Rosa’s takedowns should be a significant threat to Edwards. If Edwards is unable to defend the takedown, it will be a rough night for her. There is no value taking Rosa as the -240 favorite. For these reasons, my pick is.. 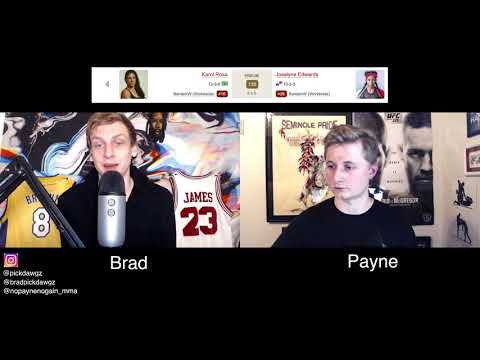