Seung Woo Choi and Youssef Zalal are fighting at UFC Vegas 18 on Saturday, February 6, 2021 on ESPN+.

In this featherweight (145lb) bout, we have Seung Woo Choi vs. Youssef Zalal. Choi is fighting out of Seoul, South Korea. He is entering this bout as a +185 underdog. Choi won his last bout in 2019 against Suman Mokhtarian. Before his last win, he was on a two fight losing streak. He lost to both Gavin Tucker and Movsar Evloev. He has a professional MMA record of 8-3-0 and has 5 wins by KO/TKO (63%), 0 submissions (0%), and 3 decisions (38%).

Zalal is fighting out of Joao Pessoa, Brazil. He is entering this fight as a -245 favorite. Zalal lost his last bout to Llia Topuria. Before his last loss, he was on a four fight win streak and has notable wins over Peter Barrett, Jordan Griffin, Austin Lingo and Jamie Hernandez. He has a professional MMA record of 10-3-0 and has 2 wins via KO/TKO (20%), 5 submissions (50%), and 3 decisions (30%).

Zalal is a well-rounded fighter, but I think Vegas has it wrong. I don’t agree with these lines. Zalal is entering this bout on short notice, which is concerning for me. In his last fight against Topuria, his gas tank failed him. If you think Zalal will win this fight, I wouldn’t include him as a parlay piece. This will be a very close fight. Choi is a great UFC prospect. Both of Choi’s losses were from top-level competition, so you can’t put too much stock in these losses. Choi is going to have a significant reach and striking advantage. If this fight remains on the feet, Choi will have a lot of success. For these reasons, my pick is... 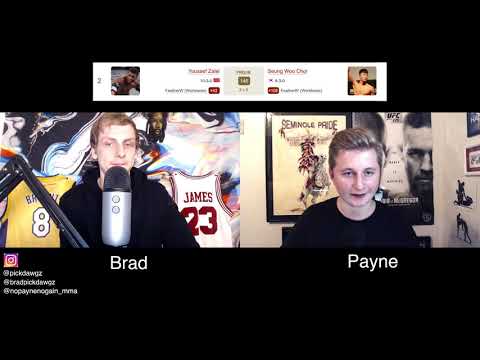