Timur Valiev and Martin Day are fighting at UFC Vegas 18 on Saturday, February 6, 2021 on ESPN+.

In this featherweight (145lb) bout, we have Timur Valiev vs. Martin Day. Valiev is fighting out of Moscow, Russia. He is entering this bout as a -345 favorite. His last fight against Trevin Jones was ruled a no contest. Before his last fight, he was on a six fight winning streak. He has notable wins against Taigro Costa, Giovanni da Silva Santos Jr, and Max Coga. He has a professional MMA record of 16-2-0 and has 5 wins by KO/TKO (31%), 2 submissions (13%), and 9 decisions (56%).

In Day's last bout against Anderson dos Santos, he had a terrible performance. He showed poor fight IQ when he shot for the takedown against a well decorated submission artist. The only thing that concerns me is Day’s significant reach advantage, however, Valiev is going to have a significant advantage on the ground and is a great prospect in the UFC. He is currently fighting out of Jackson Wink MMA so he has a plethora of training partners. Valiev has the better output, fight IQ and ground game. Valiev’s clearest path to victory is to keep this fight on the ground. There is no value picking Valiev as a -345 favorite, however, the value is in a prop bet. For these reasons, my pick is... 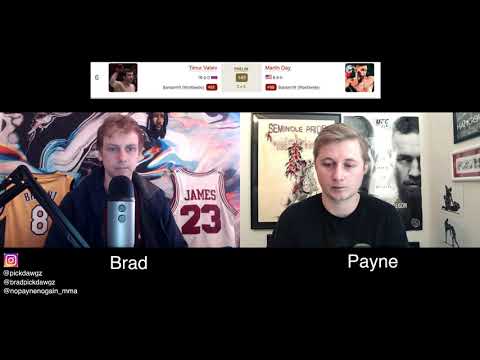