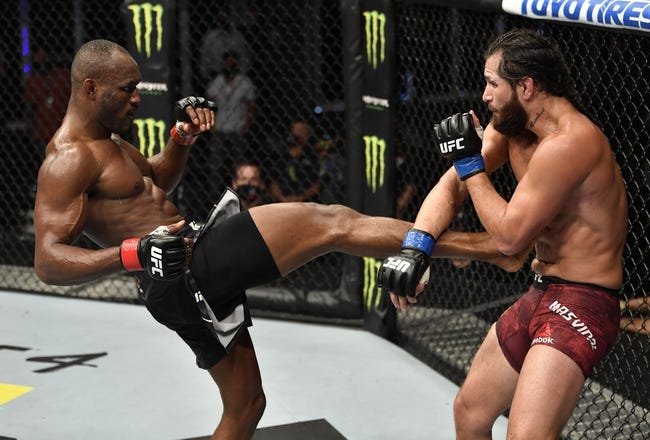 Kamaru Usman enters this fight with a 18-1 record and has won 50 percent of his fights by decision. Usman has won his last 17 fights and is coming off a February win over Gilbert Burns. Usman is averaging 4.66 significant strikes per minute with an accuracy percentage of 54 percent. Usman is averaging 3.22 takedowns with an accuracy percentage of 47 percent. Usman is coming off a third round knockout at UFC 258 where he landed 93 total strikes and 61 percent of his significant strikes. Usman has produced knockouts in two of his last three fights and has also defended his belt three straight fights. Usman is a takedown machine with a deep wrestling background, a black belt in BJJ and a quality ground and pound attack. Usman is a really gifted athlete who usually gets the fight where he wants it and can spend majority of the fight from the top position where he simply wears on his opponents and controls the fight from start to finish. It may not always be sexy for the viewing audience, but there’s no denying Usman is in control when he’s in the octagon and has a winning formula. This will be Usman’s second career fight in Florida.

Jorge Masvidal enters this fight with a 35-14 record and has won 49 percent of his fights by decision. Masvidal has split his last six fights and is coming off a July loss to Kamaru Usman. Masvidal is averaging 4.20 significant strikes per minute with an accuracy percentage of 47 percent. Masvidal is averaging 1.57 takedowns with an accuracy percentage of 59 percent. Masvidal is coming off a decision loss at UFC 251 where he landed 88 total strikes and was taken down five times. The loss snapped a three-fight winning streak for Masvidal, but he gets a second chance at the UFC Welterweight title. Masvidal is a striker at heart with a boxing background and fighting in backyards before he turned pro. Masvidal has very good footwork, has become a lot more patient when he attacks and has good variety to his strikes, gaining more creativity with experience. Masvidal is most known for his standup, but he’s also had great success with takedowns under the UFC banner and does have a wrestling history as well as submission grappling, so he’s far from a one-trick pony and is respectable on the ground if needed. Masvidal hasn’t been finished since Bellator 5, so the toughness is there and his cardio is probably one of the more underrated traits to his game. This will be Masvidal’s 15th career fight in Florida.

At this point betting against Usman seems like a waste of time, as he controls every fight, dominates the ground and his striking is getting better and better. Usman is making a case as the best pound for pound fighter in the sport and there’s not many holes in his game to make a case for his opponents. However, these prices are getting to the point where it’s hard to back Usman unless you’re picking a finish. As for a case for Masvidal, he still has the striking to end this fight and he did a good job of staying on his feet against Usman in the first fight. Also, this time Masvidal has a full camp to train and prepare, as he took the last bout on extremely short rest.

Due to the big plus money, I’ll take a shot with Masvidal.