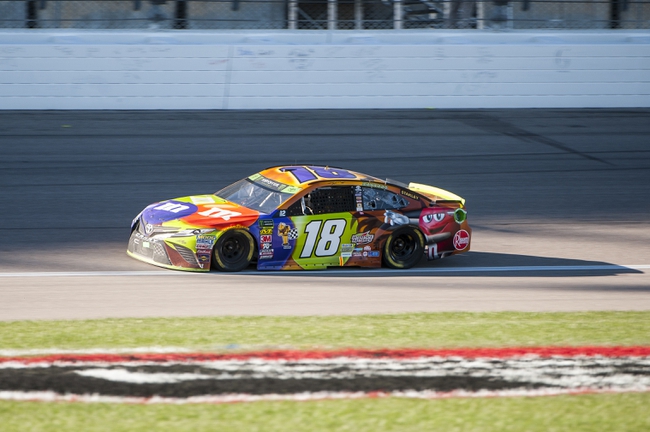 We make our fourth and final trip to Virginia for the First Data 500, the first race in the round of eight. This race debuted in 1949 and is the oldest NASCAR race still running. Three of our drivers last week finished eighth or better, so while it’s been a while since producing a victory, we’ve been knocking on victory lane each week. Eventually that door has to open.

Martin Truex Jr. - Martin Truex Jr. has finished in the top-five in three of the first six playoff races and is coming off a fifth place finish last week. Like we are, Truex is due for a victory to kind of end the drought. Truex finished runner-up in this race last year and has finished no worse than seventh in five of his last seven appearances at the Martinsville Speedway. Truex has an average finish of third place in his last two trips to this track. I’ll play Truex and +640 odds this week.

Jimmie Johnson - I’ve said countless times that I was done playing Jimmie Johnson due to him not coming close to a victory. Well, Johnson has finished in the top-10 in three of his last five races and is a six-time winner at this event. The only other drivers to win this race six times are Darrell Waltrip, Jeff Gordon and Richard Petty. In his last 15 appearances at this race alone, Johnson has finished fifth or better 12 times. How in the world can you not put something on Johnson and +3300 odds this week?

Kyle Busch - Kyle Busch is only bringing in odds of +275 this week, but there’s value there given his history at this track. Busch is not only the defending champion at this event, but he’s finished no worse than fifth in each of his last six appearances at the Martinsville Speedway. You have to go back to 2014 when Busch wasn’t somewhere in the top-five in a race in Ridgeway. Busch owns this track like no other and is in a great position to get his eighth victory of the year.

Denny Hamlin - Denny Hamlin hasn’t won a race in over a year, but he is a two-time winner at this event and has won a race at the Martinsville Speedway for times in his career. Hamlin has also finished eighth or better in each of his last five appearances at this particular event and has finished eighth or better in five of his last eight trips in Virginia overall. Hamlin is a strong dark horse this week given his history here, and he’s bringing in solid odds of +2000.

Joey Logano - Joey Logano has finished in the top-10 in each of his last four races and still has something to play for given he’s in the top-eight. Logano has finished in the top-10 in six of his last nine appearances at the Martinsville Speedway and finished sixth in the first race here earlier in the year. Logano has been one of the more consistent drivers the last couple of months despite not winning a race, and when you throw in his recent history here, you have to give him a punchers chance to get the job done. I’ll take a stab with Logano and +1000 odds.