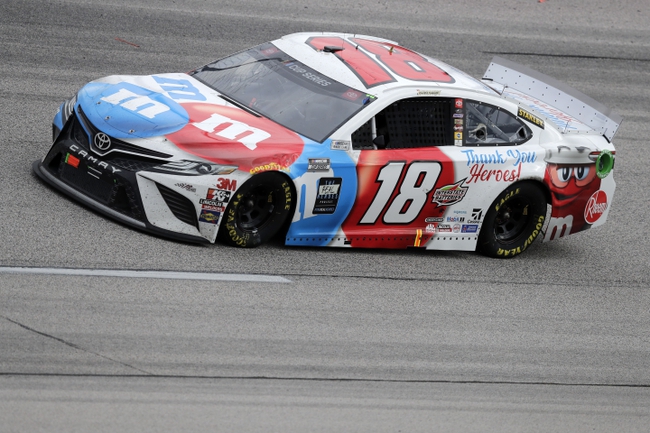 We continue an auto racing marathon on Thursday afternoon with the NASCAR Xfinity Series Toyota 200 that will take place at the Darlington Raceway. I usually focus only on the NASCAR Cup Series, and we had a winner on Sunday with Kevin Harvick at +800 odds, but with the lack of betting options in the sports world currently, it only makes sense to put something together for every race possible. Let’s not waste much time here…

Kyle Busch, -140 - Laying juice in auto racing where you have 20-plus options doesn’t make sense, but there’s reason why Kyle Bush is the overwhelming favorite on Tuesday. Busch hasn’t raced at the Darlington Raceway in the NASCAR Xfinity Series since 2005, but he’s finished no worse than fourth in his last five appearances, which includes a pair of victories. Busch should also be motivated to bounce back from his poor showing at The Real Heroes 400 and he has an edge simply getting the rust off on Sunday. The potential payout isn’t great, but nobody has gone broke making a profit.

Brandon Jones, +1000 - Brandon Jones won the last Xfinity race and has been one of the more consistent drivers this season, finishing sixth or better in three of the four events and eighth or better in six of his last eight races overall. Jones has raced at the Darlington Raceway four times and has top-10 finishes in two of those tries. Form and experience makes Jones a solid bet to make 10 times your money.

Noah Gragson, +1600 - Noah Gragson has finished seventh or better in three of the four races this season and has top-10 finishes in 12 of his last 15 races overall. Gragson has only raced at the Darlington Raceway once in his career, but that one appearance turned into an eighth place finish in the 2019 Sport Clips Haircuts VFW 200. Given the consistency, Gragson should be bet on whenever he’s getting odds this large.

Austin Cindric, +1400 - Austin Cindric is averaging a finish of 4.3 in his last three races and has finished eighth or better in nine of his last 11 races overall. Cindric has only two appearances at the Darlington Raceway, but his last trip resulted in a top-10 finish. I’ll take a stab with these odds as Cindric chases his first Xfinity victory since the 2019 B&L Transport 170.

Riley Herbst, +2500 - If youre looking for a true dark horse, Riley Herbst and these odds are worth a look. While racing experience is still limited, Herbst is averaging a finish of seventh place in his last three events. The 21-year-old was heating up before Coronavirus shut everything down and the fact everybody may be a little rusty kind of evens the playing field to boost his chances for his first career victory. I like this play as a shot in the dark.