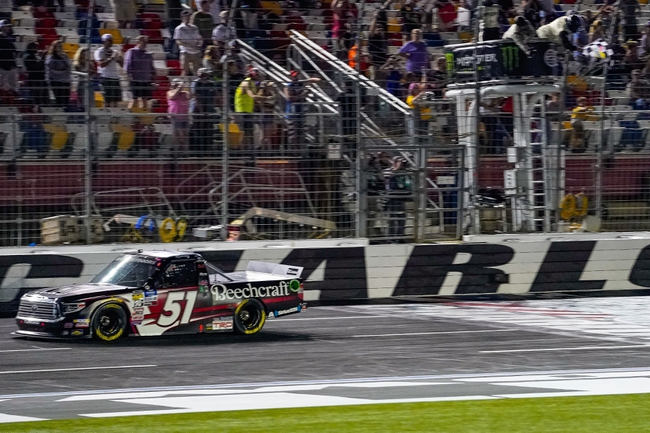 We continue our racing marathon this Tuesday with the North Carolina Education Lottery 200 in the NASCAR Gander RV & Outdoors Truck Series. This race will be held at the Charlotte Motor Speedway and is 201 miles. We’ve had a lot of success with betting NASCAR since the sport has returned. Let’s keep cashing those tickets.

Kyle Busch, -140 - I don’t like laying juice in these type of events where you can bet on 20-plus drivers, but Kyle Busch has absolutely owned this race with eight victories, including two of the last three years. Only Ron Hornaday Jr. and Matt Crafton are the other two drivers to win this race more than once. Busch has either won or finished runner-up in his last nine appearances at the Charlotte Motor Speedway in the truck series. Nothing left to say here.

Austin Hill, +1800 - Austin Hill doesn’t have a whole lot of success at this track, as his sixth place finish here last year was his best showing ever at the Charlotte Motor Speedway. Still, we have a chance to make 18 times our money with Hill who has the most points through two races and is averaging a 3.3 finish in his last three races overall. Hill and his form is good enough reason to chase these odds.

Sheldon Creed, +3300 - If you’re looking for a big dark horse and massive odds, Sheldon Creed could be worth a look. Creed has top-10 finishes in each of his last three truck races, and he’s had great success at the Charlotte Motor Speedway in the ARCA Menards Series and Stadium Super Trucks. At 22 years old, Creed’s first win could not be far behind if he continues to build on his strong performances.

Johnny Sauter, +1400 - Johnny Sauter has finished no worse than eighth in each of his last five truck races, and he won this race back in 2018. In fact, Sauter has finished third or better in three of his last four appearances at the Charlotte Motor Speedway in the tuck series. The fact you can make 14 times your money with a Sauter victory given his history is probably the best value bet on the board for Tuesday’s card.

Ben Rhodes, +1400 - Ben Rhodes finished fifth in Las Vegas before the hiatus, and he now has top-five finishes in two of his last four races overall. Rhodes has only raced at the Charlotte Motor Speedway four times in his career, but he’s averaging a finish of 5.6 in his last three trips, improving his place each time. There’s a decent chance Rhodes gets his third career truck series victory this week.