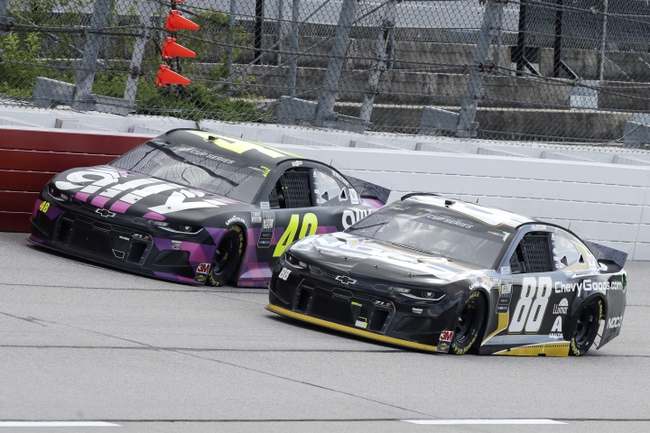 Drivers were finally able to enjoy a week off after so many races in a short span, and now we head to Georgia for Sunday afternoon in the QuikTrip 500. This race debuted in 1960, is a little over 500 miles and usually takes about three and a half hours to complete, so it will certainly fill up some time this weekend. Of course, we’ve been on a heater, which includes cashing a +1400 ticket with Noah Gragson in the Cheddar's 300. Let’s stay hot.

Here are five drivers to consider throwing on this weekends card.

Jimmie Johnson, +1980 - It’s been a while since Jimmie Johnson has won a race, but in his last season ever, it’s only right he tastes victory lane at least one more time. Johnson showed serious progress last week with a third place finish in Bristol. Johnson also knows his way around the Atlanta Motor Speedway, and he’s won this race four times, which is tied for the most in history. If Johnson is going to win a race again before he hangs it up, this is one where he has a realistic shot.

Kevin Harvick, +550 - Few drivers have been as busy or as hot as Kevin Harvick, and he enters this weekend as the favorite to taste victory lane yet again. Harvick won this race in 2018 and finished fourth here last year. Harvick has finished sixth or better in four of his last five trips at this race, and he’s also a five-time winner at the Atlanta Motor Speedway in the Xfinity Series. Nothing left more to say here.

Kurt Busch, +1980 - Kurt Busch is a live dark horse this weekend simply due to finishing no worse than seventh in six of his last seven races. With a bounce here or a bounce there, and Busch is a multiple time winner this year. With that form in mind, Busch has also finished no worse than eighth in five of his last six trips at the Atlanta Motor Speedway. Busch has also won at this track three times earlier in his career. This is a live, live pick if looking for a potential big payout.

Kyle Busch, +660 - We might as well double dip and throw Kyle Busch on the card as well. Busch is another driver who could easily have victories on his resume this year, as he’s finished fourth or better in five of his last seven races. Expect the form to continue considering Busch has finished no worse than seventh in five of his last seven appearances at the Atlanta Motor Speedway. Busch is a two-time winner at this track in the Cup Series and has won seven times in Hampton when you combine his experience in the Xfinity Series and Truck Series.