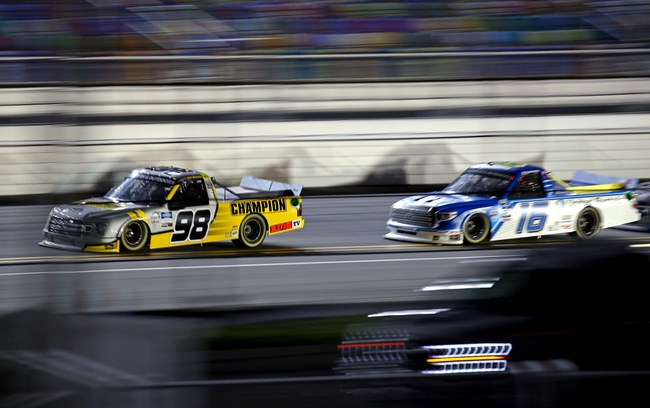 We have two races to bet on Saturday with the Baptist Health 200 taking place at night in Miami with this being part of the NASCAR Gander RV & Outdoors Truck Series. This race debuted in 1996 and is 201 miles long. Like many of the races since the return of the break, we’re piling up the cash and I don’t plan to slowdown anytime soon. Let’s break this thing down.

Kyle Busch, -120 - As I’ve said before, I don’t enjoy laying juice when putting together a racing betting card, but Kyle Busch is tough to ignore. Busch is one of two drivers to win this event twice, and he’s either won or finished runner-up in 11 of his last 12 appearances in the NASCAR Gander RV & Outdoors Truck Series. You can’t put together a serious auto racing card without including Busch.

Austin Hill, +1200 - Austin Hill is coming off a runner-up spot in Atlanta and has now finished third or better in three of his last five races overall. Hill is the defending champion at Homestead, his fourth ever appearance at this track. Hill has been one of the more consistent drivers since the end of last season and a chance to make 12 times your money feels like a steal.

Brett Moffitt, +1200 - Brett Moffitt is starting to find his form as of late with back-to-back top-10 finishes and has finished inside of the top-10 in 14 of his last 18 trips overall. Moffitt won this race in 2018 and finished fifth last year, producing an average of third place in two trips at the Homestead-Miami Speedway. Again, this is another solid play with these odds.

Zane Smith, +3300 - If you’re looking for a bigger potential payout, Zane Smith and these odds are worth consideration. Smith has never run in Miami in his career, but he’s been money in his short time in the Truck Series. In five career races in this series, Smith has finished no worse than 11th and is averaging a sixth place finish. If that trend continues, a chance to make 33 times our money feels like a bet I can’t pass up.

Chase Elliott, +425 - Chase Elliott has limited experience in Miami and doesn’t have a whole lot of success in those races. However, Elliott is one of the more talented drivers in this field, and he’s won two of his last three Truck Series races, which includes a win a couple weeks ago in the North Carolina Education Lottery 200. Elliott has finished fifth or better in nine of his last 13 Truck Series appearances overall. The odds won’t make you rich, but Elliott is one of the drivers who gives you the best chance to get paid.