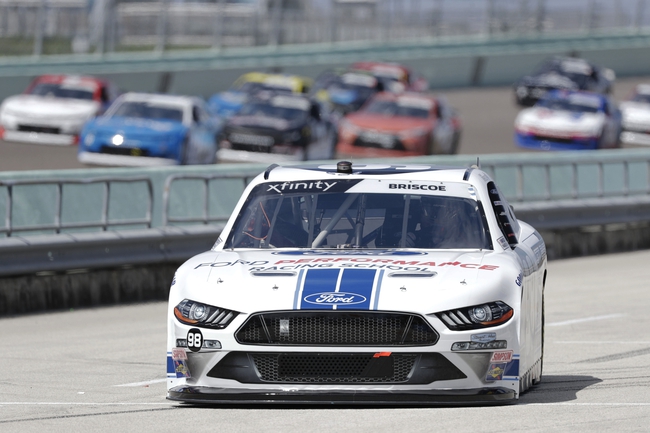 We go from Miami to Alabama for the Unhinged 300, a race that debuted in 1992 and is a little over 300 miles long. After race after race, it feels like now things have settled down a bit and we’re back to somewhat of a normal schedule, giving us more time to find some winners. We didn’t cash a ticket last week, but three of our drivers listed finished in the top-10 and two of those were inside the top-five, so it’s safe to say we have a good feel heading into the heart of the season.

Brandon Jones, +1200 - Brandon Jones is in too good of form to turn down at this price, as he’s strung together four straight top-10 finishes and was runner-up in Miami last week. Jones doesn’t have a ton of success at the Talladega Superspeedway outside of being runner-up at this race in 2018 and in the 2015 Sugarlands Shine 250. Still, Jones is a driver nibbling around victory lane and these odds are tough to pass up.

Chase Briscoe, +800 - Chase Briscoe is the hottest driver in the league right now after winning Miami, and he’s now either won or finished runner-up in four of his last nine races overall. Briscoe doesn’t have a lot of experience at the Talladega Superspeedway, but he did have a fourth place finish here last year. I’m not stepping in front of how hot Briscoe is right now.

Justin Haley, +1000 - Justin Haley has yet to win an Xfinity race in his limited career, but don’t let that shy you away from these odds, as he’s coming off a sixth place finish in Miami and had a third place spot in Atlanta. Haley finished seventh in this race last year and one of his few racing wins came in the 2017 General Tire 200 at the Talladega Superspeedway. Haley isn’t far away from his first Xfinity victory, so get these odds while you still can.

Austin Cindric, +1000 - Austin Cindric hasn’t won a race in a while, but he’s produced top-10 finishes in 10 of his last 13 tries and that sort of consistency is always worthy of consideration. Cindric finished fifth in this race last year and had a fifth place finish in the 2017 Sugarlands Shine 250, two of his limited trips to Alabama. Cindric and a chance to make 10 times your money is a good bet given his ability to always be in the mix.