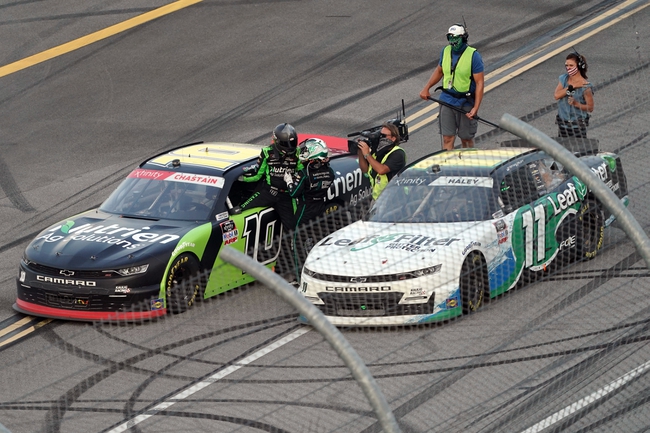 We head to Pennsylvania for the NASCAR Xfinity Series Sunday for the Pocono Green 225.

This race debuted in 2016 and is 225 miles. We continue to pile up the winners in auto racing betting, and we cashed last week with Justin Haley at +1000 odds.

Noah Gragson, +550 - Noah Gragson is currently the leader for the drivers championship and has top-five finishes in four of his last five races. Gragson finished sixth in this race last year, his only trip at the Pocono Raceway in the Xfinity Series. Regardless, Gragson has to be on the card whenever he’s not the favorite, as he’s been the most consistent driver all year long.

Ross Chastain, +880 - Ross Chastain has zero success at the Pocono Raceway in the Xfinity Series, but he’s coming off a third place finish in Miami and a runner-up spot at Talladega. Throw history out the window, Chastain is a must bet this week based on current form. Chastain does have some success in Pocono, as he won the 2019 Gander RV 150 in the Truck Series.

Chase Briscoe, +250 - With already three wins this year and a runner-up finish in Bristol, Chase Briscoe has cashed a lot of nice tickets already. Briscoe should bounce back nicely from his forgettable performance in Talladega, and he finished third in this race last year, just his second appearance at this track in the Xfinity Series. The odds aren’t usually what we chase in these articles, but Briscoe is the guy to beat this week.

Justin Haley, +2500 - I mentioned that it wouldn’t be long before Justin Haley tastes victory lane, and he cashed us a nice +1000 ticket last week. Why not get greedy and double dip? Haley is averaging a 5.75 place finish in his last four races and has finished sixth or better in five of his last nine races. Haley finished ninth in his first Xfinity trip at the Pocono Raceway and is averaging a 7.5 finish in his two trips here in the Truck Series.

Harrison Burton, +880 - Harrison Burton has never raced at the Pocono Raceway in the Xfinity Series, but he has some success at this track in the ARCA Menards Series and a third place finish in the Truck Series, so he’s not completely green. Burton should be eager to get the nasty taste out of his mouth from Talladega, and he’s somebody who has top-five finishes in seven of the 11 races up to this point. I’m not worried about the lack of experience on this track.