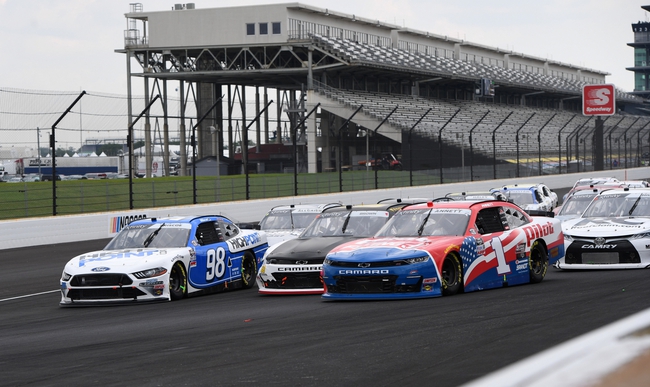 We head to Kentucky for the NASCAR Xfinity Series Thursday for the Shady Rays 200.

Austin Cindric, +650 - Austin Cindric has limits experience at the Kentucky Speedway, but he produced a top-10 finish at this race in 2018 and is currently one of the hotter drivers in the Xfinity. Cindric is coming off a fifth place finish last week in Indiana and has top-five finishes in three of his last five events, which includes a runner-up spot in Miami. It’s only a matter of time before Cindric finishes these strong showings and tastes victory lane for the first time this year.

Chase Briscoe, +205 - There’s not a lot of meat on the bone with these odds, but it’s impossible to put together a card and not include Chase Briscoe, the driver who has won three of the last four races. Briscoe has won five races this season overall and is creating some serious distance in the drivers championship standings. Briscoe also finished fifth last year in his only trip at the Kentucky Speedway.

Justin Haley, +4000 - Justin Haley won the Unhinged 300 a couple weeks ago and just finished runner-up at the Pennzoil 150, so we’re getting these monster odds with a driver in terrific form. Haley does have limited experience in Kentucky, but he finished 10th here last year and has a pair of strong showings in the NASCAR Camping World Truck Series. These odds are a bit confusing.

Ross Chastain, +700 - Ross Chastain has zero success in Kentucky for his career and you have to go back to 2014 the last time he finished in the top-10 at the track. However, Chastain has six straight top-10 finishes overall, producing an average finish of 4.8 during that span. Chastain is the best driver who hasn’t tasted victory lane yet this year and he’s been knocking on the door these last several races.

Michael Annett, +15000 - Michael Annett is coming off back-to-back top-10 finishes and could easily have a win or two this year. Annett finished fourth in this race last year and has six top-10 finishes at the Kentucky Speedway in the Xfinity Series overall. Annett also finished runner-up in his only Kentucky appearance in the Truck Series, which took place in 2008. If you’re looking for a dark horse and willing to take a shot in the dark, Annett is worth a look at this price.