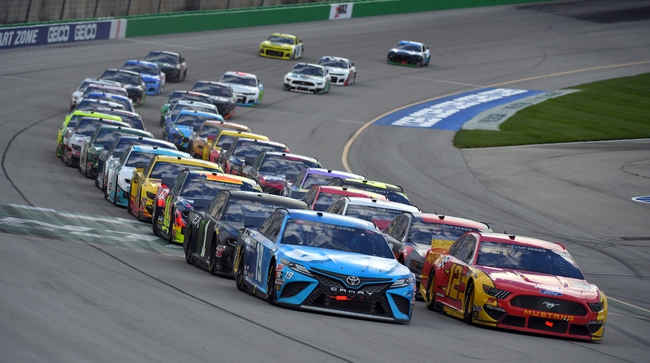 We head to the Kansas Speedway Thursday for the Super Start Batteries 400 in the 2020 NASCAR Cup Series.

Here are five drivers to consider throwing on Thursday’s card.

Brad Keselowski, +1000 - Brad Keselowski is the defending champ at this race and is the only driver to win this event twice, a race that debuted in 2011. Keselowski also finished runner-up in this event in 2017 and has finished sixth or better in three of his last six trips at the Kansas Speedway. Keselowski and a chance to make 10 times your money is a solid bet.

Martin Truex Jr., +700 - Martin Truex Jr. has been hit or miss all season long and isn’t finishing his races as cleanly as we’re used to seeing. This should be a good track for a bounce back week for Truex, as he won this race in 2017 and was a runner-up in 2018. Truex has finished sixth or better in five of his last six appearances at the Kansas Speedway. Truex is going to show up this week.

Kyle Busch, +750 - Kyle Busch still hasn’t won a race in the Cup Series, but he put together a top-five finish on Sunday and has top-10 finishes in six of his last 10 races. Busch won this race in 2016 and has finished fifth or better in six of his last nine trips at the Kansas Speedway. Busch also has countless wins at this track in the Truck Series and Xfinity Series. We also don’t get Busch at these prices often, so take advantage while you still can.

Aric Almirola, +1600 - Aric Almirola is a name I’ve given out a couple times recently and will continue as long as he stays hot. Almirola has strung together seven straight top-10 finishes and is averaging a finish of 5.2 during that stretch. Consistency is big with my selections and it’s only a matter of time before Almirola finishes one of these races. Almirola also has six career top-10 finishes at the Kansas Speedway, so he’s no stranger to solid runs at this track.

Joey Logano, +1200 - Right when it looked like Joey Logano was falling off a cliff and no longer worth considering as a betting option, he finishes third in Texas. Logano has three top-five finishes at this event and has finished fifth or better in seven of his last 13 appearances at the Kansas Speedway overall, which includes wins in the 2014 and 2015 Hollywood Casino 400. This may be a good week to jump back on the Logano bandwagon.