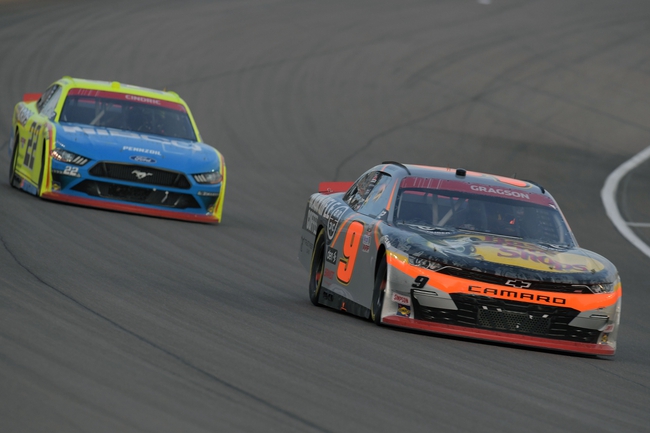 We head to Concord, North Carolina for the NASCAR Xfinity Series Saturday afternoon for the Drive for the Cure 250.

This is the final race in the round of 12. Last week we cashed our Xfinity ticket with Justin Haley and his +500 odds. Here are five drivers to consider throwing on Saturday’s race card.

AJ Allmendinger, +375 - AJ Allmendinger hasn’t looked great in his last two Xfinity races, but he’s still finished in the top-five in five of his last eight races overall and won Atlanta’s race this year. Allmendinger is the defending champion at the Drive for the Cure 250, his first appearance at this track in the Xfinity ranks. Hard not to include Allmendinger on the card this weekend.

Noah Gragson, +1000 - Noah Gragson has finished no worse than eighth in each of his last six races, so just the consistency alone makes him easy to back these days. Gragson has also raced at the Charlotte Motor Speedway three times in the Xfinity Series and two of those trips produced top-five finishes. Gragson also has a pair of top-10 finishes at this track in the Truck Series. Gragson is a nice value play this week if looking to avoid some of the cheaper favorites.

Chase Briscoe, +425 - Chase Briscoe is closing in on a potential title and has won two of the last three Xfinity races and three of the last eight races overall. Briscoe won the Drive for the Cure 250 back in 2018 and had a ninth place finish here last year. You’re not going to get rich with Briscoe these days, but making over four times your money never made anyone broke.

Brandon Jones, +6600 - I’m trying my best to stay away from the same names every week and provide some drivers with a little more meat on the bone odds wise. I’ll take a shot in the dark with Brandon Jones. Outside of a couple of top-10 finishes, Jones doesn’t have much success at the Charlotte Motor Speedway, but he is coming off a fourth place finish in Talladega and has top-10 finishes in six of his last 10 races. Based on his track record this season, Jones will give these odds a run for its money.

Austin Cindric, +170 - Austin Cindric is another driver you’re not going to get rich backing this week, but he’s the clear favorite for a reason. Cindric has finished third in three of his last four trips at the Charlotte Motor Speedway and is averaging a 4.5 place finish during that span overall. While he doesn’t yet have a win here, Cindric has been one of the more consistent drivers these last three years at this track and has to like his chances for his sixth win of the season.