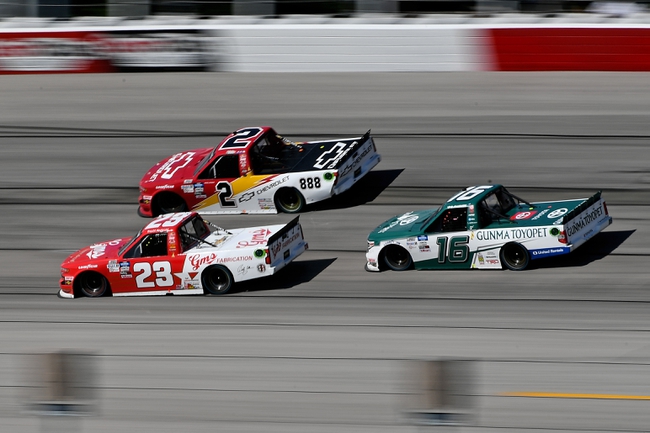 We head to Virginia on Friday for the NASCAR Hall of Fame 200 in the NASCAR Gander RV & Outdoors Truck Series.

Sheldon Creed, +500 - Sheldon Creed hasn’t had any success at the Martinsville Speedway, finishing outside of the top-10 in two career trips. However, it’s tough to put together a card these days without including Creed, as he just won in Fort Worth and has finished no worse than second place in three of his last four races overall. Creed has either won or finished runner-up in five of his last 10 races.

Austin Hill, +1800 - Austin Hill is another driver who doesn’t enjoy the Martinsville Speedway, as he has just two top-10 finishes in eight appearances. That’s still not enough for me to turn down these odds, as we’re talking about a driver in Hill who has strung together back-to-back top-five finishes and has finished third or better in five of his last eight races overall. Consistency is big with me and it’s hard to find guys as hot as Hill right now.

Brett Moffitt, +350 - Brett Moffitt has top-10 finishes in 13 of his last 16 races and is averaging a finish of 4.3 in his last three races overall. You can expect the form to continue, as Moffitt has finished sixth or better in four of his five career trips at the Martinsville Speedway, which includes a runner-up spot in the 2018 NASCAR Hall of Fame 200. Moffitt is a strong candidate for his second win of the season.

Johnny Sauter, +1200 - Johnny Sauter has had issues finding his form this season and has finished outside of the top-10 in his last four races. However, Sauter has loved Virginia throughout his career, as he’s won this race twice and has finished third or better in five of his last seven trips at the Martinsville Speedway overall. Sauter has four victories at this track for his career. You can argue Sauter has the best value on the board for this weeks race.

Todd Gilliland, +1800 - Todd Gilliland hasn’t had a top-10 finish ice South Carolina, so there’s reasons to be down on him at the moment. The good news is Gilliland has one career Truck Series victory at that came here last year in the NASCAR Hall of Fame 200. There’s a history of duplicate winners, as this event debuted in 2003 and there’s three drivers who have won twice. Gilliland could cash a nice ticket heading into the weekend.