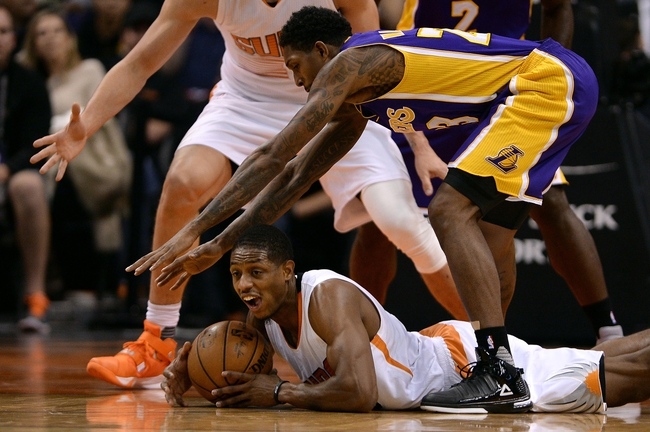 NBA Player Updates 11/17: The Latest News from Around the League, Tonight's TV Schedule and More

We’ve got a pretty active NBA schedule in store for us tonight, with seven matchups on the slate. While we’re settling in and waiting on those, let’s check out some of the notable stats and players out there in our daily wrap-up.

Mavericks-Sixers: Dallas got off to a nice 28-15 start in the first quarter against the Sixers last night, and really never looked back. Things got close during the fourth quarter of the 92-86 victory, but Dirk Nowitzki scored seven of his 21 points during a great Mavericks run to help close the game out.
Jahlil Okafor posted 19 points and 11 rebounds, but Philly still dropped their 11th game to start the season and their 21st straight dating back to last year.

Celtics-Rockets: The Celtics didn’t look like a team that was playing their fifth game in seven days last night. They cruised to a relatively easy win over the Rockets in Houston 111-95.
Isaiah Thomas put up 23 points and the Celtics used a 15-0 run at the end of the third quarter to pull away. Avery Bradley logged 21 points with four 3-pointers; Jae Crowder chipped in 16 points.
On the other side, Trevor Ariza led the Rockets with 19 points, while James Harden managed 16.

Spurs-Blazers: Manu Ginobili had a big fourth quarter last night against the Blazers. He scored 14 of his 17 total points in that period to help the Spurs to a 93-80 victory. Kawhi Leonard helped out with 19 points and nine boards, but LaMarcus Aldridge could muster just six points and six rebounds against his former team.
The teams got off to a sketchy start, combining for just 27 percent shooting in the first quarter.
The Spurs have won five straight games overall and are now 4-0 at home.

Suns-Lakers: Out in Phoenix, Brandon Knight posted the first triple-double of his career against the Lakers in a 120-101 victory at home.
The Suns got in a late run to help secure the win, going 21-8 during the fourth. Eric Bledsoe put up 21 points, while on the other side Jordan Clarkson had 20.
Kobe Bryant was missing from this game. He stayed back in Los Angeles to rest after a tiring effort on Sunday night.

NBA Daily Schedule: Here’s the league’s daily schedule. Let’s check out the matchups, times and channels where you can find all the action.