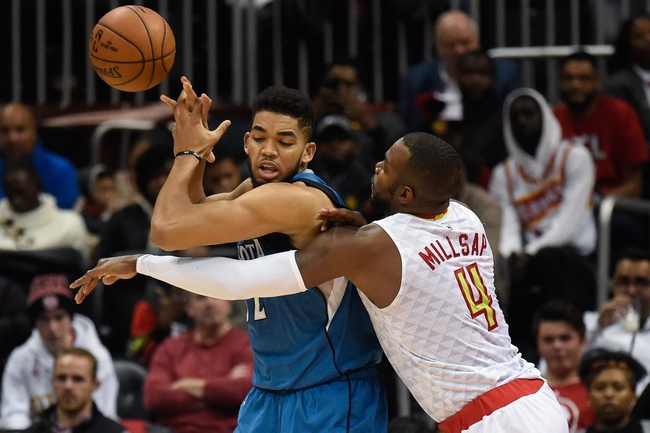 The Atlanta Hawks invade the Target Center to take on the Minnesota Timberwolves on Monday night.

The Atlanta Hawks have won five of their last eight games and they'll be looking to build on Friday's 109-108 win at Denver. Dennis Schroder led the team in scoring with 27 points and five assists, Paul Millsap added 20 points while Mike Muscala added 13 points as the Hawks closed the game on a 9-0 run in the final 1:39 to snatch the unlikely victory. It was a much-needed win for a Hawks team struggling for consistency as they've alternated wins with losses for their last six games. With the win, Atlanta improves to 15-15 overall and 8-8 on the road.

Meanwhile, the Minnesota Timberwolves have split their last six games and they will be hoping to avoid a third straight loss after last night's 112-100 loss to the Thunder. Karl-Anthony Towns led the team in scoring with 26 points, Andrew Wiggins added 23 points while Zach LaVine had 16 points but the Timberwolves failed to capitalize on a hot start and faded as the game wore on. Once again, the third quarter was a problem for the Wolves as they were outscored by 29-22 and they made just four threes in total which is another recurring theme for this young team. With the loss, Minnesota falls to 9-21 overall and 5-10 on the road.

The Wolves looked good in patches in last night's loss to the Thunder, but they continue to fade late in games, particularly in the third quarter so I think there's value with the Hawks who are coming off a nice win.

The pick in this article is the opinion of the writer, not a Sports Chat Place site consensus.
Previous Pick
Team LeBron vs Team Durant NBA All Star Game Picks, Odds, Predictions 3/7/21
Next Pick
NBA News