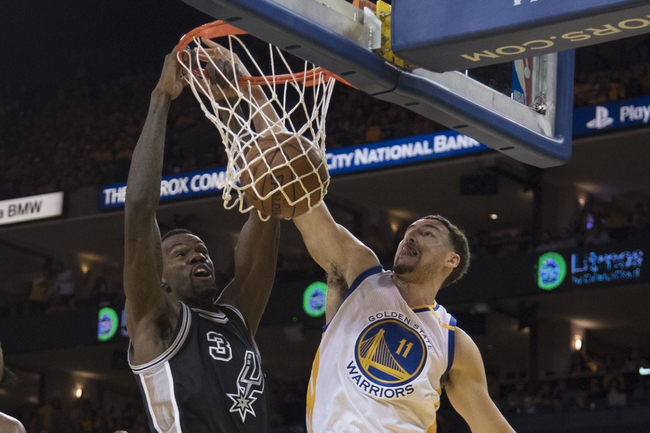 The Golden State Warriors and the San Antonio Spurs clash in Game 3 of the Western Conference Finals at the AT&T Center on Saturday.

The Golden State Warriors will be looking to take a commanding 3-0 series lead after crushing the Spurs by 136-100 in Game 2 on Tuesday. Stephen Curry led the team with six 3-pointers on his way to 29 points, seven rebounds and seven assists,

Kevin Durant added 16 points while Draymond Green chipped in with 13 points, nine rebounds and six assists. As a team, the Warriors shot a healthy 56 percent from the field and 18 of 37 from the three-point line but to be fair, the game was decided before halftime as the Warriors were already leading by 25 points early in the second quarter. Andre Iguodala sat out the game with left knee soreness and has already been ruled out for Game 3, while Zaza Pachulia should be considered questionable after leaving Game 2 with a right heel injury.

Meanwhile, the San Antonio Spurs needed to come out with guns blazing after the heartbreaking loss in Game 1, but they came out flat and absolutely paid for it as they found themselves down by double digits in a blink of an eye. LaMarcus Aldridge finished the game with just eight points, Pau Gasol scored just seven points while Patty Mills had just five points as the Spurs shot just 37 percent from the field and eight of 23 from the three-point line. In fact, the best player for the Spurs was actually Jonathan Simmons who scored 22 points on eight of 17 shooting. Coach Popovich will still be feeling filthy about his best player in Kawhi Leonard, but he didn’t hesitate to criticize his team’s lack of belief in themselves as they really didn’t put up a fight after falling behind early.

The Spurs have looked totally outmatched since Leonard went down with that ankle sprain but there’s a good chance he’ll play given the extra four days of rest. The Spurs can’t afford to fall into a 3-0 series deficit, so with their backs now against the wall, I’m backing the Spurs to come out fighting and pull out the upset at home. However, I don’t give them much of a chance if Leonard is unable to suit up for Game 3.

Unfortunately, the news is that Kawhi Leonard has been ruled out for Game 3 which is obviously a major loss for the Spurs, so I'm going with the Warriors to win this one by double-digits.