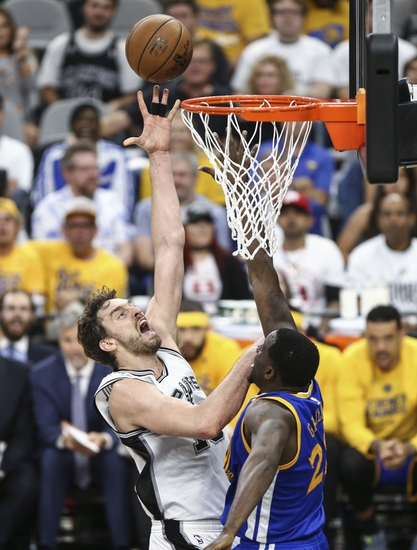 The San Antonio Spurs and the Golden State Warriors duke it out in Game 4 of the Western Conference Finals at the AT&T Center on Monday.

The Golden State Warriors will be looking to complete the sweep after taking a commanding 3-0 series lead with a 120-108 win in Game 3. Kevin Durant led the team with 33 points, 10 rebounds and four assists, Stephen Curry added 21 points with six steals, Klay Thompson added 17 points while JaVale McGee added 16 points in just 13 minutes of action. As a team, the Warriors shot 54 percent from the field and 11 of 27 from the three-point line, but it wasn’t a one-sided affair like it was in Game 2 as the Spurs shot out to an early lead before the Warriors took control in the second quarter to build a nine-point lead going into halftime. The Spurs started the narrow the gap after halftime but Durant kept the Warriors in charge with 19 points in the third quarter before the reserves took over in the fourth quarter.

Meanwhile, things just went from bad to worse for the San Antonio Spurs who were again without their leader in Kawhi Leonard. Manu Ginobili led the team with 21 points in just 18 minutes of action but he had very little support as LaMarcus Aldridge scored just 18 points while Pau Gasol chipped in with just 12 points. Patty Mills was inserted into the starting lineup but he had just seven points on two of 10 shooting while Jonathan Simmons scored 14 points with five assists, but the Spurs just didn't have enough firepower to hang with the Warriors, especially after losing David Lee to injury in the first quarter. As a team, the Spurs shot 47 percent from the field while forcing the Warriors into 21 turnovers, but they shot just five of 21 from the three-point line.

Head to head, the road team is 5-2 ATS in the last seven meetings, the over is 4-0 in the last four meetings overall and the under is 6-2 in the last eight meetings in San Antonio.

The news from the Spurs camp is that Leonard is unlikely to play in Game 4 which obviously means that the Warriors are heavy favorites in this one. The Spurs will be playing for pride as they don't want to get swept at home, but with Leonard, Parker and now Lee injured, I don't see them being able to extend the series against this Warriors team. I think the Warriors book their ticket to the NBA Finals with another double-digit win here.