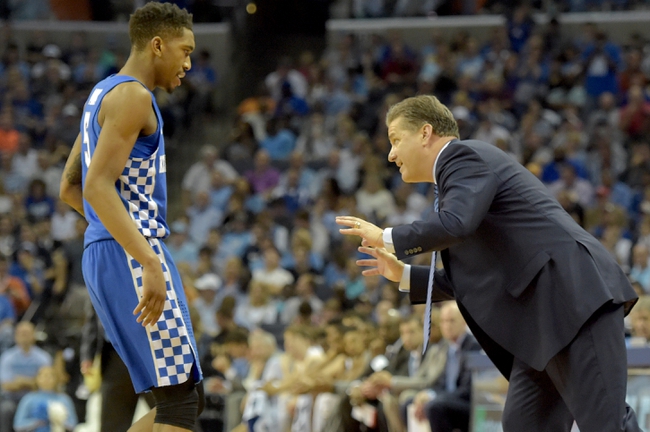 The Orlando Magic have won 35 or less games in each of the last five seasons and have not made the playoffs since Stan Van Gundy was head coach. This is a franchise that lacks direction and could use a firestarter to kind of shake things up. A player that fits that bill in the 2017 NBA draft is Kentucky's Malik Monk.

Monk was a joy to watch in college because of his ability to heat up at any moment. Once he sees the ball go through the hoop, watch out. He topped 30 points four times and had only two games out of 38 where he didn't score double digits. Monk shot 49.7 percent from two, 39.7 percent from three and averaged nearly 20 points for a team that won the SEC and made the Elite Eight.

Bottom line is that Monk is an elite shooter with NBA range and can create his own shot off the dribble. He's not afraid of the moment and is just tapping into his offensive ability considering he's capable of being a better driver who can finish through contact. Monk is the type of player the Magic need, and he has All Star ability once he realizes his potential and becomes more than a guy pulling up from 30 every possession.

Last season, the Magic were 27th in total points scored, 29th in field goal percentage and 29th in three point percentage. Last season the Magic scored less than 100 points 37 times, which is a little over 45 percent of their games. In today's NBA where threes are key and teams want to light up the scoreboard with more shot attempts, you can't compete when those shots aren't falling.

Monk to the rescue.

You give the Magic a shotmaker, and that opens the floor for guys like Aaron Gordon, Nikola Vucevic and Terrence Ross to be more effective in the paint. It also takes pressure off of Evan Fournier, as his top-10 scoring performances last season produced losses due to a lack of help.

Once his overall game improves and he becomes a more willing passer, Monk could also see a move to point guard, which would be timely with Elfrid Payton coming towards the end of his deal that includes a team option this upcoming season. Payton hasn't proven he's a starting point guard in three seasons, and the addition of Monk would either allow a move to the bench or free up dollars to spend elsewhere.

The Orlando Magic have some decent pieces you can build around, they just need a serious boost to their backcourt. Adding Monk would be a major addition and make Orlando fun to watch.

Monk should be wearing a different shade of blue in a few weeks.