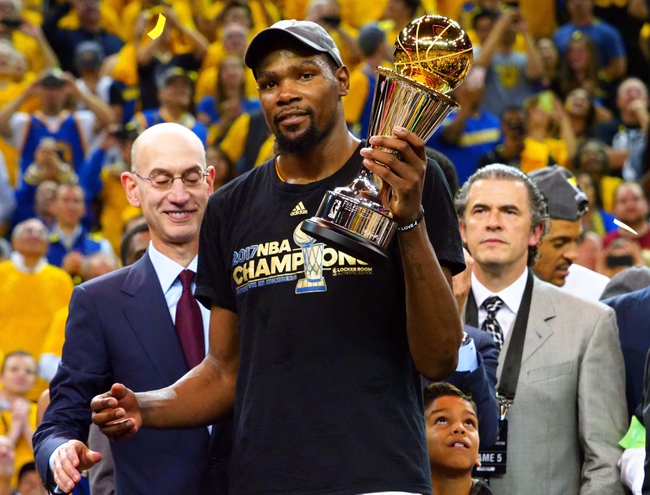 Now that the NBA season is finished and the Golden State Warriors are crowned champs, let’s take a quick peek at how the teams stack up heading into the 2017-18 season. Of course, we still have the NBA draft, free agency, training camp and preseason before things take place, but staying fresh on every team in the league makes you a better gambler and can lead to more success.

3. San Antonio Spurs - The San Antonio Spurs are still the third best team in the league with a healthy Kawhi Leonard, and they could close the gap a bit if they're able to convince Chris Paul to leave Los Angeles.

4. Houston Rockets - The Houston Rockets will pretty much be able to run back the same team last year that was first in the league in three pointers made and one of only a couple of teams that can hang with Golden State offensively.

5. Boston Celtics - A Eastern Conference Finals trip, No. 1 pick and cap space to go after Gordon Hayward. Yeah, the Boston Celtics should be better than they were a season ago.

9. Milwaukee Bucks - I’m high on the Milwaukee Bucks after what we saw last season, and they have more experience now, a top-20 pick and Jabari Parker is expected to return around the All-Star break. The Bucks are an exciting team to watch closely.

10. Utah Jazz - If the Utah Jazz stay together, they'll have little trouble doing what they did a year ago, fighting for homecourt and making a decent playoff run. The big question is if Hayward wants to commit long term to a team that currently has a ceiling.

12. Miami Heat - If the Miami Heat that played the second half of the season shows up for a full season, watch out. There’s also word that the Jazz are afraid Hayward leaves for South Beach. An even bigger watch out if that takes place.

14. Memphis Grizzlies - David Fizdale proved to be a solid coach in his rookie season, and the Grizzlies still have their 1-2 punch in Conley and Gasol. Now, if Memphis had a healthy shooter in Chandler Parsons to open the floor.

15. Atlanta Hawks - The Atlanta Hawks could really drop in these rankings if Paul Millsap decides to leave. If he doesn’t, the Hawks are what they've been the last decade; a decent East team that has extremely limited upside.

17. Denver Nuggets - The Denver Nuggets have a young promising roster and could attract some free agents who want to play with Nikola Jokic. The No. 13 pick could also help Denver’s bench. The Nuggets are a team that can shoot up the rankings depending on how this offseason goes.

19. Indiana Pacers - Not sure if Paul George will be on the Indiana Pacers come October, but even with him, this team isn't great and is one of the main reasons PG wants out. It feels like the Pacers need a full blown makeover and getting assets for their best player is the first step to making that happen.

20. Dallas Mavericks - The Dallas Mavericks found some hidden production last season in Seth Curry and Yogi Ferrell, and they have the No. 9 pick in the draft. The Mavs have a chance to be better than a lot of people expect.

22. Detroit Pistons - The Detroit Pistons have the depth and talent to make some noise in the East, it’s just a matter of actually getting it done and some spacing would help. Adding Luke Kennard in the draft would be nice.

23. Chicago Bulls - The Chicago Bulls have a lot of questions to answer such as what to do with Jimmy Butler and if Dwyane Wade is returning. The Bulls may be like the Pacers in that tearing it down for a year or two would be best for the franchise in the long term.

24. Los Angeles Lakers - The Los Angeles Lakers are slowly moving in the right direction with a young core, and they should get a better season out of Brandon Ingram. Adding a guy like Lonzo Ball, who makes everybody around him better, would give the Lakers hope for the first time in years.

25. Phoenix Suns - The Phoenix Suns have a peice who they can build around in Devin Booker and can add either De'Aaron Fox or Jayson Tatum in the draft. While it's going to take more than that, at least the Suns will be watchable, which is more than we can say for some of these other clubs.

26. Charlotte Hornets - The Charlotte Hornets are well coached and play a physical style of basketball, but it’s often Kemba Walker or bust on the offensive end. A spacer such as Lauri Markkanen could make the Hornets so much better. Until then, Charlotte is just very much blah.

27. Orlando Magic - The Orlando Magic have some decent pieces to be a better team in the near future, but they need to find a guard who can set those guys up. While not a point guard, Malik Monk would be fabulous for a Magic team that struggled mightily from the outside.

28. New York Knicks - Phil Jackson has rubbed everybody the wrong way to the point even Kristaps Porzingis is fed up. The Knicks also played themselves out of a top-five pick. It’s hard to have any confidence in this franchise until Phil is gone.

29. Sacramento Kings - The Sacramento Kings have pretty much a clean slate to do whatever they want to do and the fifth pick in the draft. The problem is it’s going to be tough to get above-average free agents to want to play for this organization.

30. Brooklyn Nets - While they’re late, the Brooklyn Nets do have two first round picks, so there's some positives. But at the end of the day, the Nets have a very limited roster that will once again be one of the worst teams in the league.