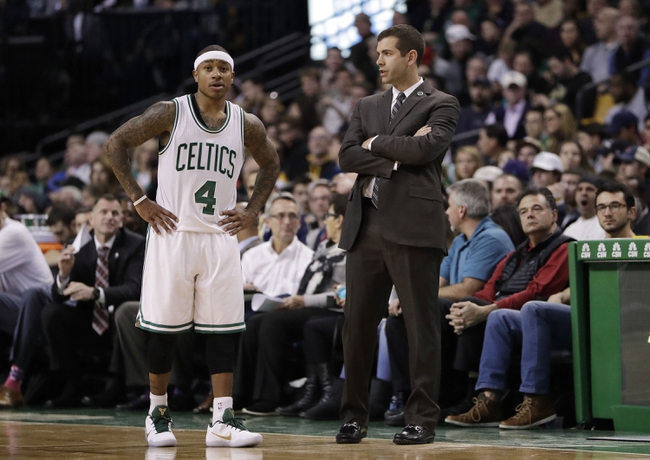 Expectations are on the rise for the Boston Celtics after making the Eastern Conference Finals last season and improving their roster during the offseason. The Celtics are in great shape to make the playoffs for a fourth straight season under coach Brad Stevens and many consider them to be the biggest threat to the Cleveland Cavaliers in the East. It should be another fun year for Boston sports.

Key Player Losses: The biggest loss was when the Celtics traded 26-year-old guard Avery Bradley to the Detroit Pistons. Bradley is one of the better defenders in the league at his position and is coming off his best offensive season in which he averaged 16.3 points on 46.3 percent shooting. Kelly Olynyk leaves for the Miami Heat, a versatile big who can stretch the floor with his outside shot and is an underrated passer off the dribble. Veteran power forward Amir Johnson is now with the 76ers after combining for more than 1,000 points and 800 rebounds in two seasons in Boston. The Celtics lost another power forward with backup Jonas Jerebko, who is a career 35.2 percent shooter from deep.

Key Player Additions: The Celtics made the splash of the offseason by adding All Star Gordon Hayward, who is a top-15 player and contributes at a high level at both ends of the court. Gordon is coming off a season in which he averaged nearly 22 points per game, and he’ll make life easier for everybody else. Boston also added its new starting power forward in Marcus Morris, who averaged 14 points back-to-back years with the Detroit Pistons and brings that tough defensive mentality to a team that already has that identity. Morris is a good fit with the Celtics and is just entering his prime at almost 28 years old. Aron Baynes also adds size and rebounding to a Boston team that was often killed on the boards last season.

Draft: Jayson Tatum showed what he’s capable of during summer league and at just 19 years old, the sky is the limit for his improvement. Tatum is already an offensive force and will immediately provide a spark off the bench, but he’s also somebody who could soon be one of the faces of this team on the rise. Semi Ojeleye is a versatile forward who was pretty much a walking double-double in college and Kadeem Allen is a good defender with an improved outside shot. Jabari Bird is a former 5-star recruit with raw skills and great size, but he’ll have to prove himself over time to crack this rotation.

Outlook: As of right now, the Celtics are the biggest challenge to the Cavaliers, but I’m not as high on them as others seem to be. Boston still has issues in the post where they can be owned on the glass, and the offense is still limited by a bunch of guys who aren’t great shooters. Yes, Hayward makes life easier and will free up Isaiah Thomas, but there’s a bunch of key rotation players who don’t scare opponents offensively. That’s an issue when the best teams in the league are offensive powerhouses. However, the Celtics are a contender, can still make improvements and are just one of four teams with NBA title odds under +1000. All you want is a shot in sports, and the Celtics clearly have it.