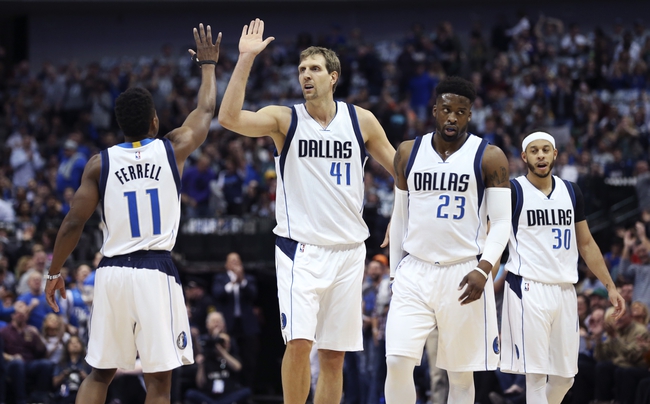 The Dallas Mavericks are coming off a season in which they won just 33 games and haven’t missed the playoffs back-to-back years since the first two years Don Nelson was head coach. The West didn’t get any easier for a team like the Mavs, but Rick Carlisle is one of the better coaches in the league and the franchise has shown great consistency over the last 10 decade plus. The Mavericks are used to winning records and competing, and one down year won’t change those expectations.

Key Player Losses: None. The Mavs kept the same team intact from a year ago by picking up Yogi Ferrell’s option and resigning Dirk Nowitzki for a two-year deal. The Mavericks rotation this season will be extremely similar to what it was a few months ago.

Key Player Additions: The only player on the Mavs roster right now who wasn’t here a season ago is Josh McRoberts, who Dallas picked up in a trade with the Miami Heat for a draft pick, cash and A.J. Hammons. McRoberts is a career 46.4 percent shooter from the field and is a good passer, but he’s struggled with injuries the last few years and has played a combined 81 games the last three seasons. Hardly a key addition, but McRoberts is an addition nevertheless.

Draft: The Mavericks landed one of the top players in the draft in Dennis Smith Jr., who could be thrown in the starting lineup at some point this season. Smith has the athleticism, quickness, shooting ability, passing and size to become one of the better players at his position in due time. Smith showed some of that potential during summer league and it’s clear he’s just scratching the surface of his potential at nearly 20 years old. With Dirk on his last leg, Smith is the future of this franchise.

Outlook: While the Mavs didn’t do much winning last year, I like a lot of their pieces. Yogi and Seth Curry have shown they can be an explosive backcourt, while Nerlens Noel adds an inside presence this team has lacked for years. Harrison Barnes also shot the ball well last season and Wesley Matthews still has flashes of being the player he once was for Portland before his injury. Throw in Smith, who is a strong Rookie of the Year candidate, and the Mavs aren’t as bad as their record indicates. However, Dallas does play in the West, and when you consider the Minnesota Timberwolves and Denver Nuggets got better while the New Orleans Pelicans have a full season of Anthony Davis and DeMarcus Cousins, and it’s tough to be a top-eight team. Still a fun team to watch though.