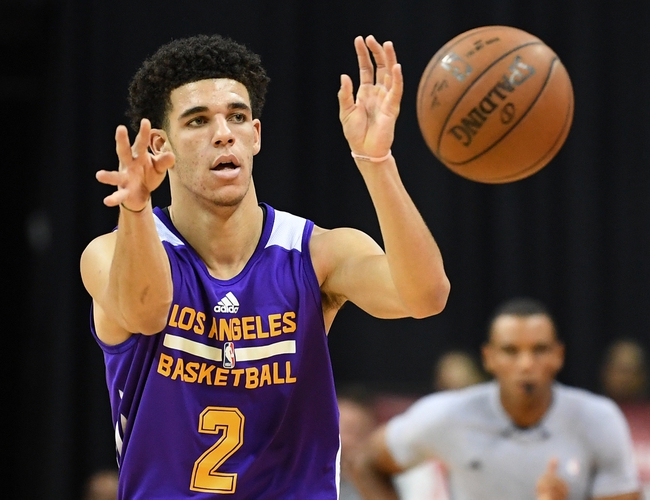 The Los Angeles Lakers haven’t made the playoffs since Mike D'Antoni was head coach and have won a combined 43 games the last two seasons. With Magic Johnson now having power of the franchise and moves being made, many are far more optimistic about the Lakers future. However, the question right now for the Lakers is how good can they be in the upcoming season to prove there’s a light at the end of the tunnel?

Key Player Losses: The Lakers send young point guard D'Angelo Russell to Brooklyn after two seasons in which he shot 40.8 percent from the field, 35.1 percent from three and averaged four assists. Russell is only 21 years old and could become one of the better players at his position if he develops a more consistent shot. The Nick Young era is over after four seasons when he took less money to chase a ring with the Golden State Warriors. Young shot 37.7 percent from deep in 220 games with the Lakers and chipped in nearly 2,900 points overall. The Lakers also got rid of a horrible contract in Timofey Mozgov after he played just 54 games last season and had just 264 rebounds.

Key Player Additions: The Lakers upgrade at center by bringing in Brook Lopez in the Brooklyn trade. Lopez is still just 29 years old, and he’s averaged 20-plus points four times in his career while shooting 50.6 percent from the field. Kentavious Caldwell-Pope signs as a free agent after four seasons with the Detroit Pistons, and he brings length and defense to these young Lakers. Caldwell-Pope is also coming off a year in which he shot 35 percent from three, a career high for the 24-year-old. Both of those additions make the Lakers a better basketball team, and Lopez instantly becomes a leader of the squad considering he’s so much older than the rest of the starting lineup.

Draft: Lonzo Ball becomes the starting point guard for the Lakers and is considered by many to be the future of the franchise. While there are questions about his shot and his father can be a handful to deal with, Ball is an elite floor general with terrific upside and a nice player to build around. Kyle Kuzma has great size and athleticism for the power forward spot and improved post moves that make him an intriguing prospect. Josh Hart is a gamer who isn’t afraid to take the big shot and brings leadership skills to the court. The downside is Hart isn’t a great athlete and will struggle to create his own shot at the NBA level. Thomas Bryant is a lengthy player who runs the floor well, can stretch the floor with his outside shot and plays with a ton of energy. While still a bit of a project, I like Bryant’s potential and think he can develop into a decent contributor over time.

Outlook: The Lakers are going to be a fun team to watch this season, as they have an actual NBA starter in Lopez, and players such as Brandon Ingram and Julius Randle should show even more progress with another year under their belts. Ball is also an exciting point guard with leadership skills and will make everybody around him better like he did at UCLA. There’s nice pieces in place with this squad and cracking 30 wins for the first time since 2012-13 is a more than realistic goal. However, while there will be fun moments and more success than they’ve experienced recently, the Lakers are far too young and still lack the overall depth to be taken seriously in the West. I’d take the over on 32.5 wins, but the Lakers will have to wait a season before being considered a playoff team.